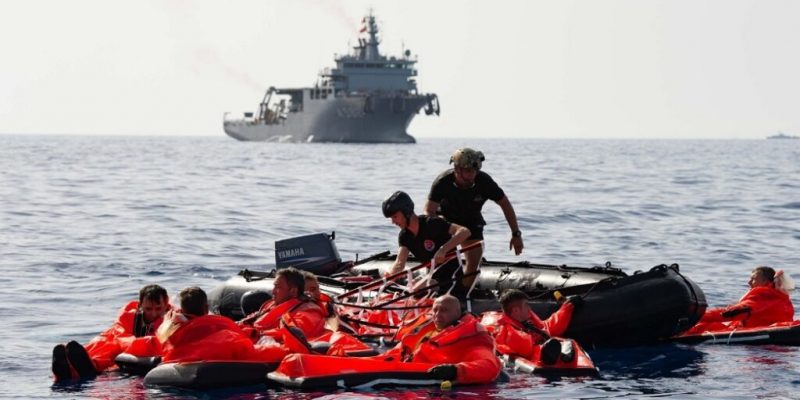 This year’s NATO-sponsored live Submarine Escape and Rescue (SMER) exercise, Dynamic Monarch/Kurtaran 2021, took place from September 12 to September 24 in the Eastern Mediterranean Sea, off the coast of Aksaz, Turkey. It was the 11th of several SMER exercises that have taken place in the past few years.

In conjunction with the annual Turkish Navy exercise Kurtaran, which is hosted by the Turkish Navy, the International Submarine Escape and Rescue Liaison Office (ISMERLO) runs the exercise.

A submarine laid over the seabed representing a sunken submarine and training followed locating the lost submarine by search and rescue ships, aircraft and equipment. After establishing a rescue village at sea over the submarine, casualties were transferred to TCG Alemdar, the Search and Rescue Ship where they received first medical aid including re-compression operations and evacuation of the casualties to the hospital ashore from onboard.

Dynamic Monarch/Kurtaran 2021 Training regarding providing air to the submarine utilizing remote-operated vehicles and divers, placing a rescue chamber over the submarine and rescuing the submarine crew was also conducted.

Assets and personnel participating in the exercise, repeated the training each time with different assets including Italian Navy submarine ITS Todaro, Turkish Navy Submarines TCG Canakkale and TCG Anafartalar in order to improve interoperability between allied units.

The International Submarine Escape and Rescue Liaison Office (ISMERLO) is an organization that aims to facilitate an international response for a distressed submarine and to improve the ability to respond to a call for assistance through its coordination role.

Although established by NATO, ISMERLO supports all nations and pursues the involvement of global submarine-operating nations and focused on the humanitarian aspect which is saving lives at sea.

ISMERLO also provided support and expertise during the search and rescue efforts after real-life accidents with Argentine Navy Submarine San Juan in 2017 and Indonesian Navy Submarine KRI Nanggala in April 2021.

Check out Naval Library App to find out the specifications of the TCG Alemdar MOSHIP.