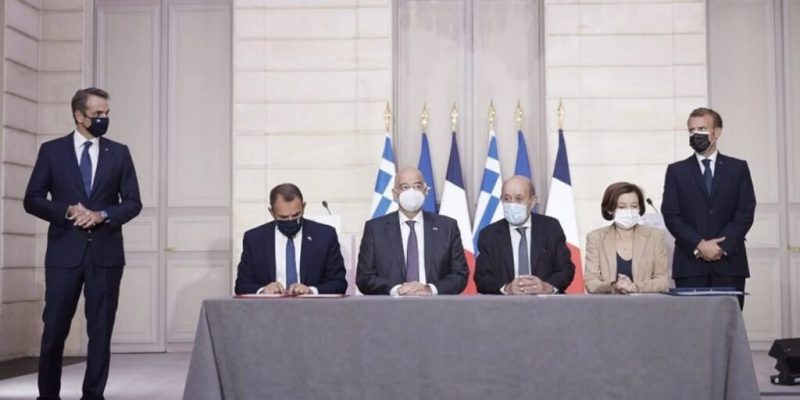 Athens and Paris signed an agreement on Tuesday to establish a “strategic partnership” that includes the sale of three frigates, with the option to purchase a fourth.

In remarks made at the signing ceremony in Paris, French President Emmanuel Macron stated that the agreement is part of a deeper “strategic partnership” between the two nations.

“Today is a historic day for Greece and France because we have decided with President Macron to upgrade our bilateral defence cooperation while expanding the readiness of our states for solidarity, mutual assistance and joint action in all fields,” Prime Minister Kyriakos Mitsotakis said.

According to a press release issued by Naval Group, the FDI frigates will be built at Naval Group’s Lorient shipyard, where the second in the series has just entered production.

“With the HN defence and intervention frigates, the Hellenic Navy will have a state-of-the-art, high-performance surface fleet. A first-class frigate, the FDI HN combines the best technologies from Naval Group, Thales and MBDA, which will supply the ASTER 30 B1 and Exocet MM40 Block 3c missiles. It will be fully interoperable with European and NATO fleets.” said Naval Group in the press release.

The FDI-HN, an up-gunned version of the FDI for the French Navy, is also an outstanding ship. It features the similarly cutting edge Thales SeaFire500 radar, up to 32 VLS cells, full range sonar suite and capability of launching the Exocet MM40 Block-3 missile and ASTER-30 air defence system.

Check out Naval Library App to find out the specifications of FDI frigates.