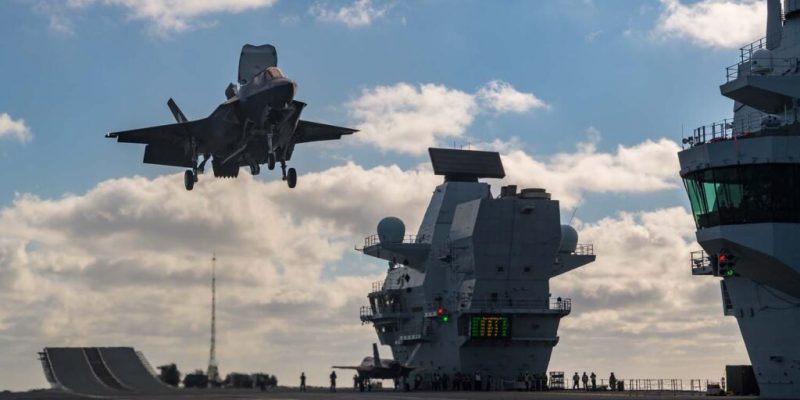 HMS Queen Elizabeth Carrier Strike Group latest activity was to work alongside ships from the Republic of Korea Navy during three days of events near Busan, which included joint maritime manoeuvres, the Royal Navy announced.

Prior to that, though, the USS Carl Vinson and HMS Queen Elizabeth’s air wings put on an impressive display of airpower, as jets from the carriers trained to work seamlessly together by practising techniques, tactics and procedures, which included mid-air refuelling.

It was the first time the UK Carrier Strike Group has interacted with the ‘C’ model of the F-35 jet, which is intended for catapult launches from aircraft carriers as opposed to the short take-off and vertical landing versions that HMS Queen Elizabeth operates.

Colonel Simon Doran, US Senior National Representative to the UK CSG, said: “Integrating United Kingdom and US Marine Corps F-35Bs into a flight with US Navy F-35Cs continues to reinforce the tactical flexibility of the F-35.

“Additionally, the mission further demonstrates the F-35’s ability to support distributed maritime operations, refuelling 5th generation aircraft from Super Hornets allows the United States and our allies to operate stealth fighters inside contested areas where legacy platforms could be vulnerable.”

The UK Carrier Strike Group then looked to the Korean peninsula and exercises with the Republic of Korea Navy.

“CSG21 has taken us from the Atlantic Ocean, through the Mediterranean, across the Indian Ocean and has brought us here to the Western Pacific for a series of exercises and engagements with regional partners, including the Republic of Korea,” said Cdre Moorhouse.

“The UK, like the Republic of Korea, is an outward-looking trading nation committed to contributing to the maritime security which underpins global prosperity.

“By sailing here we make clear our determination to work with like-minded nations in support of an open and transparent system of international rules.

“Our aim is to strengthen the ties between our two countries and pave the way for closer cooperation in the future.”

Meanwhile, HMS Richmond has stopped in Guam for a reset and HMS Diamond will shortly head through the Suez Canal shortly to deliver operations supporting the Carrier Strike Group after repairs were completed in Taranto in Italy.

Check out Naval Library App to find out the specifications of the Queen Elizabeth-class aircraft carriers.