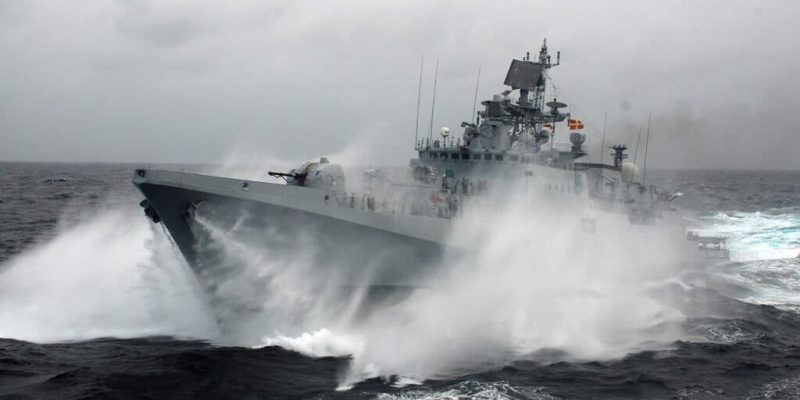 As part of the ongoing Overseas Deployment, INS Tabar entered the Port of Brest, France on 12 July 2021. The ship was received by a Ceremonial Guard of the French Navy on arrival in Port, the Indian Navy announced.

Mr Jawed Ashraf, Ambassador of India to France and Monaco visited the ship and appreciated the ship’s crew for their contribution to India’s maritime security and in furthering defence cooperation with friendly foreign countries.

The Commanding Officer accompanied by the Indian Defence Adviser called on Vice Admiral Olivier Lebas, Commander of Atlantic Maritime Region (CECLANT) at his Headquarters in Prefecture Maritime Fort, Brest. The ship dressed overall on the occasion of the Bastille Day (national day of France), as per naval custom.

On departure from Port, INS Tabar will participate in a Maritime Partnership Exercise with French Navy warship FNS Aquitaine.

INS Tabar (F44) (means “battle-axe”) is the third Talwar-class frigate of the Indian Navy. The frigate was commissioned on 19 April 2004 in Kaliningrad.

The Talwar-Class guided-missile frigate is a modified Krivak III-Class frigate in service with the Indian Navy.

Tabar became the third Indian warship to incorporate an eight-cell KBSM 3S-14NE Vertical Launcher and was the first to upload the new Indian/Russian designed missile, the supersonic BrahMos PJ-10 ASCM (anti-sub/ship/surface cruise missile). INS Tabar’s VLS can launch the Indian designed 3M-54E Klub-N (NATO: SS-N-27) subsonic ASCM. INS Tabar has one 100 mm (4 in) A-190 (E) Dual Purpose Gun mount for surface and air targets. Its rate of fire is 60 rounds a minute at a range of 15 km (9.3 mi).

There are 64 Grison reloads (32 each mount) with a package of four missiles taking less than two minutes to load. Forward of INS Tabar’s bridge and aft of the VLS is one 12-round RBU-6000 anti-submarine warfare rocket launch that can fire either Splav-90R rockets or RGB-60 depth charges. Two pairs of fixed 533 mm (21 in) DTA-53 torpedo tubes are located port and starboard midships. Both can launch either SET-65E anti-sub and 53-65KE anti-ship torpedoes.

Check out Naval Library App to find out the specifications of Talwar-class frigates.