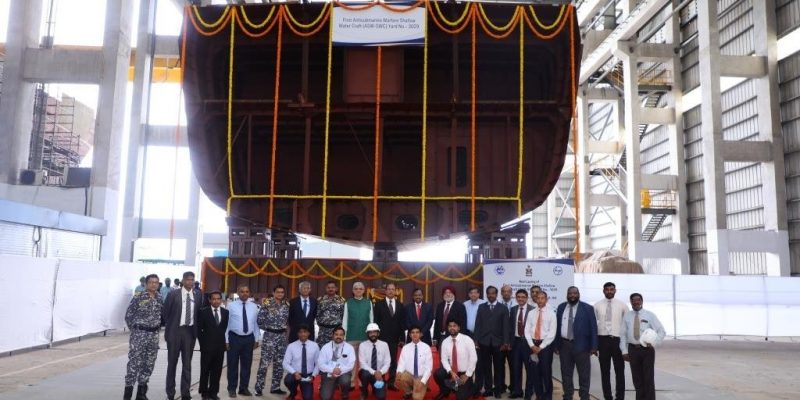 GRSE won both contracts for the construction of SVLs and ASWSWCs through competitive bidding, and both were designed by GRSE’s in-house Design Team.

The Keel Laying is a significant milestone activity in the shipbuilding process that indicates the integration of numerous blocks towards the construction of a ship.

Speaking on the occasion, Vice Admiral Ghormade lauded GRSE and L&T for their efforts in accomplishing this milestone despite Covid-19 constraints and the resultant lockdowns.

“I am glad to know that despite the challenges posed by the pandemic, both the projects are progressing very well and I am confident that GRSE having expertise in design and construction of various types of ships for the Indian Navy, will ensure the timely delivery to maritime forces.” said the admiral.

The Survey Vessel is the 3rd of the four ships being built by GRSE under the SVL project. The vessels are capable of full scale coastal & deep water hydrographic surveys with their advanced survey equipment. The vessels are 110m Long with a Deep Displacement of 3300 Tons and an accommodation of 231 Personnel. They are designed for a cruising speed of 16 knots with an in-house Hull Form Design of GRSE that imparts a superior level of operational efficiency.

The Hull form of these new generations Survey Vessel meets the stringent sea keeping and manoeuvring requirements including Helicopter Operations at high sea states. The vessels are propelled by two marine diesel engines and also have bow &stern thrusters for manoeuvring at low speeds during surveys. The ships are being built & outfitted as per the applicable provisions & regulations of the classification society.

This ASWSWC is the first of eight vessels being constructed by GRSE. The Anti-Submarine Warfare Shallow Water Crafts are designed for a Deep Displacement of 750 Tons, a Speed of 25 Knots, and a Complement of 57, and are capable of full-scale Coastal Water Surveillance, SAU, and Coordinated ASW operations with Aircraft. These vessels are propelled by water jets that can reach speeds of up to 25 knots, are compact, and are armed with anti-submarine weapons (light weight torpedoes, ASW rockets and mines). The in-house design team overcame the challenges posed by the vessels’ stringent radiated noise and magnetic signature limits.

Check out Naval Library App to find out more about the specifications of the Indian Navy assets.