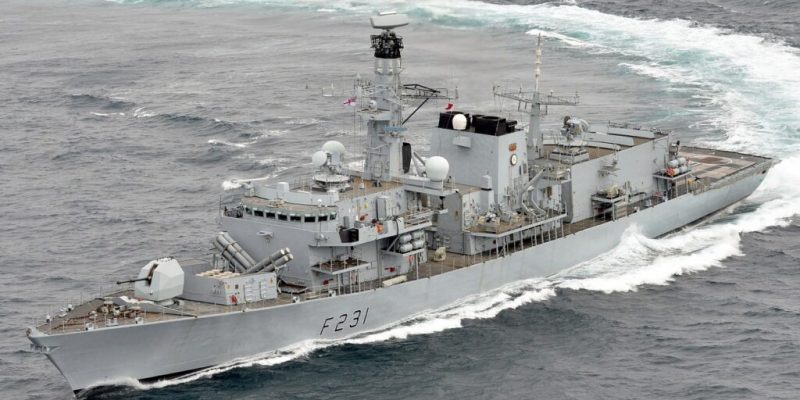 Type 26 frigate is an advanced anti-submarine warship that will replace the Type 23 frigates. The program began in 1998, under what was then known as the Future Surface Combatant. With the end of the Cold War, it was now a luxury to have more than one class frigate built for different missions. That’s why all the navies of the world started to turn to general-purpose surface combatants.

The UK worked on some innovative ideas after Future Surface Combatant Programme started. For example, in 1998, RV Triton was ordered to study whether a trimaran design was practical for such a large and complex vessel for trial purposes. However, the Royal Navy demanded more conventional designs. Therefore, towards the end of the 2000s, the replacement of Type 22 and Type 23-classes began to become urgent.

So, the program had evolved to become the Global Combat Ship in 2010. The demonstration Phase started five years later. The steel-cut for HMS Glasgow, the first of the Tip 26-class, was performed on July 20, 2017. Since the Leander-class, the UK has had difficulty selling newly built frigates on the international market.

Foreign users of Type 21, Type 22, and Type 23-classes took the ships that the Royal Navy decommissioned from into their inventory. But Type 26 was preferred by Australia before it even launched. Canada has also decided to develop a Type 26 based ship for the new frigate requirement. These two countries will build their ships in their shipyards.

The primary role of the frigate is to conduct anti-submarine warfare and local area air defense operations. But it can perform other missions such as counter-piracy, counter-terrorism, humanitarian and disaster relief, and land and surface attack. Naturally, a ship capable of meeting such a wide range of missions had to be significant. With nearly 9,000 total loaded displacements, it is something else rather than a conventional frigate. The large structure also provides an essential advantage in integrating new systems that are still being developed and are likely to be developed in the future.

The core crew of Type 26 will be 118-person. But the frigate will have room for a total of 208. Thus, the Type 26 will be able to carry a large number of civilians to be evacuated or special operation forces crew when there will be a possible need. Moreover, the ship will have up to 60 days of endurance thanks to its prominent structure, while today’s conventional frigates generally have 30 days of endurance.

The standard displacement of Type 26 is 6,900 tons. Fully loaded displacement is expected to be close to 9,000 tons. The frigate has nearly 150 meters in length, 21 meters beam. The combined diesel-electric or gas configuration propulsion system consists of one Rolls-Royce MT30 gas turbine, four MTU Type 20V 4000 M53B high-speed diesel generators, and two electric motors. The maximum speed of Type 26 is over 26 knots. With its economical speed, the ship can reach the range of 13,000 kilometers.

Unlike the British model, Australia’s Type 26, defined as Hunter-class, will have a 180-person crew and speed 27 plus knots. Also, some weapon systems will be different. The changes in the Canadian model have not been announced yet. But they will be in general-purpose configuration.

There are a sizeable integrated mission bay and hangar located amidship, enabling various missions and associated equipment. By the mission definition, the Type 26 will carry four rigid-hull inflatable boats, unmanned surface vehicles, or containers in this bay.

The Type 997 Artisan radar of the ship can detect objects as small as a tennis ball and travel at Mach 3 more than 25 kilometers away. Moreover, it can monitor more than 900 objects simultaneously from 200 to 200,000 meters. By these features, the Type 997 Artisan makes the Type 26 approximately five times more efficient than its predecessor, the Type 23.

The frigate will carry 48 Sea Ceptor air defense missiles which are launched vertically. An additional 24-cell vertical launching system is positioned forward of the bridge for surface and land-attack missiles. But these cells will be able to be equipped with quad-packed Sea Ceptors. So, depending on mission definition, Type 26 can carry 144 air defense missiles.

The Type 26’s 24-cell vertical launching system is positioned forward of the bridge for surface and land-attack missiles. For land attack, the ship will carry a Tomahawk cruise missile. Thus, Type 26 will be used against a land target located 2,500 kilometers away. However, the data released by BAE Systems and the Royal Navy does not include which anti-ship missile to be equipped with the Type 26.

However, it is known that both Australia and the UK are interested in AGM-158C Long Range Anti-Ship Missile, shortly LRASM. The USA developed this missile for modern surface combatants. Its range is more significant than 370 kilometers, nearly twice the Harpoons. Moreover, thanks to its intelligent software and advanced sensors, the LRASM can discriminate enemy ships from decoys or other vessels in the area.

The missile has a low radar cross-section airframe, low infrared signature, and does not emit signals. It is also capable of attacking land targets. However, unlike the UK, Australia announced that their Type 26s would be equipped with two four-canister Harpoon missile launchers.

Type 26 has an acoustically quiet hull for anti-submarine warfare. It is fitted with the Type 2150 next-generation bow sonar and a powerful Sonar 2087 towed array. In the data announced, the torpedo tubes are not visible on the ship. But probably, Type 26 will be equipped with these systems.

Having preferred the local 114mm gun for many years, the UK has decided to equip the Type 26 with the 127mm gun. It is a wise decision.114mm is no longer common. However, this would cause long-term problems in the production of ammunition and spare parts. In addition, the USA and Italy are developing modern shots for 127mm guns. Thus, the UK would be free from spending money to produce 114mm ammunition with similar capabilities. It should also be noted that the production rights of the US Mk 45 gun to be used in Type 26 passed to the UK-based BAE Systems company years ago.

The flight deck of Type 26 is suitable for the Chinook cargo helicopter. In standard operation, the frigate carries two Wildcat or Merlin helicopters. The hangar also has space to accommodate unmanned aerial vehicles. Thanks to this flexibility, Type 26’s air power can be easily configured for anti-submarine warfare, anti-surface warfare, special forces, search and rescue, and humanitarian missions. In their Type 26, Australia will deploy MH-60R helicopters, and Canada will deploy CH-148 Cyclone helicopters.

Type 26 has very relative displacement with Type 45 destroyer of the Royal Navy, and it is heavier than Hobart-class destroyers of the Royal Australian Navy. Yet its speed is low to be a destroyer. So, Type 26 can be described as a new class of surface combatants which the western navies need. Therefore, it is natural that this new type of ship attracts the attention of many countries interested in the oceans. However, the most significant advantage of Type 26 is that it can meet future needs with its structure open to development.

Check out Naval Library App to find out more about the specifications of the Type 26-class frigates.