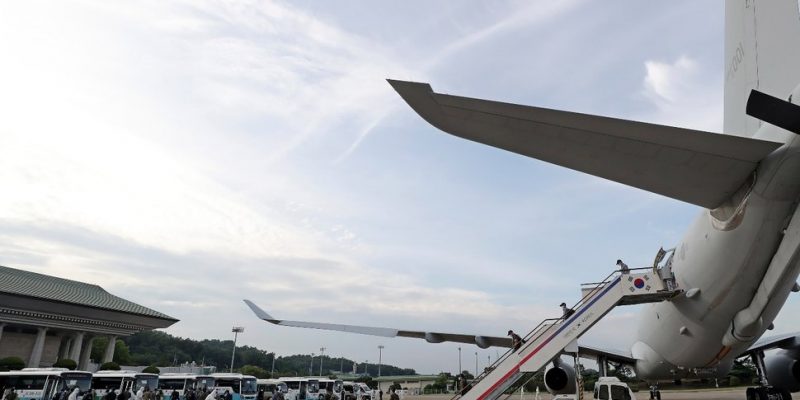 The outbreak aboard the ROKS Munmu the Great destroyer is the largest cluster South Korea’s military has seen. A total of 247 of the ship’s 301 crew have tested positive for COVID-19 in recent days, and the entire crew returned to South Korea aboard military planes on Tuesday evening. Fresh tests found 24 more cases, raising the total caseload to 271 as of Friday (July 23).

None of the crew had been vaccinated because they left South Korea in early February, before the start of the country’s vaccination campaign.

On Thursday, a team of experts from the military, the government and the civilian sector launched an investigation to find out the exact route of the mass infection. The team is jointly led by senior officials from the Korea Disease Control and Prevention Agency, and the Armed Forces Medical Command with the participation of two to three civilian experts, seven health officials and eight service members.

One officer has been dispatched to Africa for an on-site investigation of the virus-hit vessel, though the probe is expected to largely rely on the crew members’ testimony as the destroyer has been disinfected for a new team of sailors to pilot it back home.

The investigation will continue until next Friday, and the team will come up with follow-up measures based on the results, the ministry said.

Military and health authorities are working to determine the exact route of their infections based on the fact that the unit reported the first individual showing symptoms of a cold one day after their destroyer, Munmu the Great, left a local port after staying there for four days until July 1 to load supplies.

“I think it is simply not possible for the sailors to leave the ship and stay on land (given situations and rules),” a Cheonghae unit member said. “We first thought that the infection came from the loaded items.”

But the health authorities have said such a chance is quite low.

When loading supplies, one civilian pilot boarded the vessel, but the person, as well as Cheonghae unit members, wore protective gear, according to officials.

A member of the virus-hit South Korean anti-piracy Cheonghae unit on Friday dismissed speculation that some of its sailors sneaked out of their vessel while it was docked at an African port resulting in a mass COVID-19 outbreak, Yonhap News agency reported.

The military has come under fire for its poor initial response to the outbreak.

The officer who first showed symptoms was found to have been only given cold medicine, and the unit conducted COVID-19 tests belatedly, leading to the mass infection.

The defense ministry had ordered the unit to equip rapid antigen detection test kits, but the vessel kicked off its journey without them, leading to delays in discovering the COVID-19 outbreak aboard the 4,400-ton vessel.

The government also drew criticism for not actively seeking ways to inoculate them. None of them had been vaccinated as they left South Korea in February, weeks before the country began the vaccination campaign.

Earlier in the day, local dailies JoongAng Ilbo and Chosun Ilbo, citing some unit members, reported that some of the sailors had such serious symptoms as blood-tinged sputum, but they were only prescribed Tylenol.

The papers also cited them saying the vessel was “like hell,” and they were abandoned by the country.

Two top government officials apologized on Tuesday for the outbreak. None of the crew had been vaccinated. Prime Minister Kim Boo-kyum told a meeting of health officials that he was “very sorry for failing to carefully take care of the health of our soldiers.”

Prime Minister Kim Boo-kyum said in televised comments that the government is “very sorry for failing to carefully take care of the health of our soldiers who are devoting themselves to the country.”

In a separate address, Defense Minister Suh Wook said he “feels heavy responsibility for (the outbreak) and offers words of sincere apology” to the sailors, their families and the public. He said the government will work out measures to prevent similar outbreaks involving South Korean troops dispatched abroad.

Check out Naval Library App to learn more about the specifications of Munmu the Great Destroyer.