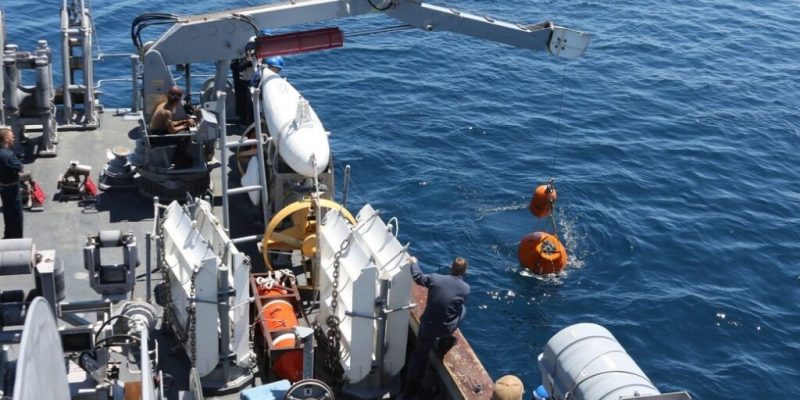 Mine warfare forces from the U.S. Navy and Japan Maritime Self-Defense Force (JMSDF) commenced Mine Warfare Exercise MIWEX 2JA 2021 off the coast of northern Japan, July 19, the U.S. Navy announced.

MIWEX 2JA is part of a series of annual exercises between the allied navies designed to increase proficiency in mine countermeasure operations in the 7th Fleet area of operations. Participants will train together in mine hunting and prosecution using shipboard mine countermeasure assets and Expeditionary Mine Countermeasures (ExMCM) personnel.

The Commodore of Mine Countermeasures Squadron 7, Capt. Scott Hattaway is enthusiastic to be working with the JMSDF and greatly values their partnership.

“Maintaining the freedom of navigation in the region is an important part of our mission in 7th Fleet,” said Hattaway. “ MIWEX 2JA exercise provides an excellent opportunity to work with like-minded partners, and hone our mine countermeasure skills to ensure the safety of maritime traffic. The addition of ExMCM unmanned underwater vehicles in conjunction with traditional countermeasure operations allows further interoperability in the region.”

During the MIWEX 2JA exercise, participating units will practice unit-level mine warfare tactics to include sweeping, hunting, and mine detection.

JMSDF Mine Division 2 and U.S. Navy Commander, Mine Countermeasures Squadron 7 will work together throughout the exercise to direct mine hunting tasks for U.S. and JMSDF ships. This training will allow all the units to practice communicating and operating in a combined environment and learn to maximize their cumulative mine hunting and prosecution capabilities.

This will be the 40th time for MINEX 21-2JA in Mutsu Bay and despite the fact that the new coronavirus infection is not yet at an end, I am very pleased that the U.S. and Japanese mine warfare forces are able to train together. The purpose of the exercise is to further strengthen the interoperability and enhance tactical skills of the U.S. and Japanese mine warfare forces,” Commander of Minewarfare force, Rear Adm. TATSUYA Fukuda.

“This time, joint training on anti-mine warfare with U.S. Navy’s minesweeper, USS Warrior, and expeditionary anti-mine warfare company will be conducted to strengthen the interoperability capability of Japan and the United States. By utilizing the achievements and lessons learned through this training, the U.S. and Japanese naval mine warfare forces will improve operational capabilities and contribute to peace and stability in the Indo-Pacific region.”

The U.S. units involved in MIWEX 2JA comprise of USS Warrior (MCM 10), ExMCM Company 1-2, and the staff from Mine Countermeasures Squadron (MCMRON) 7.

MCMRON 7 is forward-deployed to Sasebo, Japan and consists of USS Patriot (MCM 7), USS Pioneer (MCM 9), USS Warrior (MCM 10), and USS Chief (MCM 14) stationed in Sasebo and Helicopter Mine Countermeasures Squadron 14 Detachment 2A based in Pohang, Korea.

Check out Naval Library App to learn more about the specifications of the US Navy’s MCM Assets.

Investigation Continues Into Covid Outbreak aboard ROKS Munmu the Great