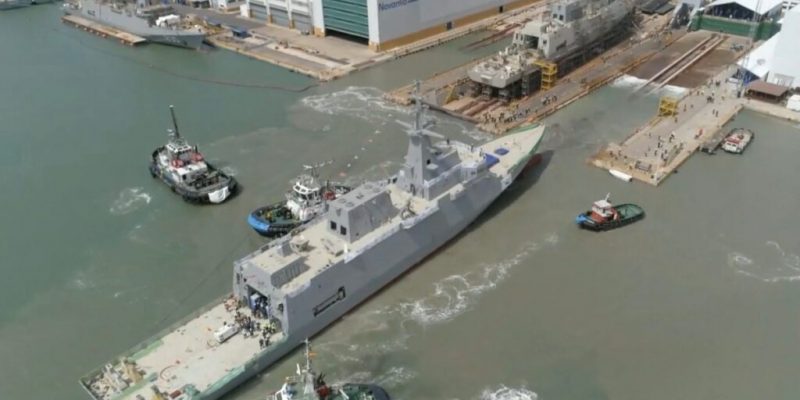 Navantia has launched today (July 24) the fourth of the five Avante 2200 corvettes being built for the Royal Saudi Naval Forces (RSNF), named “Jazan”.

The ceremony was held at the San Fernando shipyard. It was attended by the Commander of the Royal Saudi Navy, Vice Admiral Fahad Bin Abdullah Al-Ghofaily; the Chief of Staff of the Spanish Navy Admiral General Antonio Martorell Lacave; the president of the State Industrial Participation Society (SEPI), Belén Gualda; the president of Navantia, Ricardo Domínguez; the Vice President of Saudi Arabia Military Industries (SAMI), Wael Alsarhan and other officials.

The event began with a reading of the Koran, followed by the video show about the city of Jazan (which gives the ship its name), about the Avante 2200 program, and about the construction of this fourth corvette.

At the ceremony, the president of Navantia, Ricardo Domínguez, underlined Navantia’s commitment to this program, which he described as “strategic” for the company, and to Saudi Arabia: “You can count on Navantia as a reliable partner for the maintenance of ships in their life cycle and for future opportunities ” he said.

The ceremony concluded with the launching of the ship. The  work on the corvette will continue in the water until its delivery, scheduled for April 2023.

Jazan is the fourth of five corvettes which has been constructed within the project of Sarawat of Saudi Arabia.

The Jazan has a length of 104 meters, a beam of 14 meters, and will be able to accommodate 102 people (crew and additional personnel). It will reach a maximum speed of 27 knots and, among other aspects, it has the capacity to carry 21 days’ supplies on board.

The design of the corvettes is of the latest generation, maximizing the participation of Navantia by incorporating its own products, such as the CATIZ Combat System, the HERMESYS Integrated Communications System, the DORNA Firing Direction, the Integrated Platform Control System and the MINERVA Integrated Bridge, together with other equipment developed by Navantia under license, such as the MTU Engines or the RENK Reduction Gearboxes.