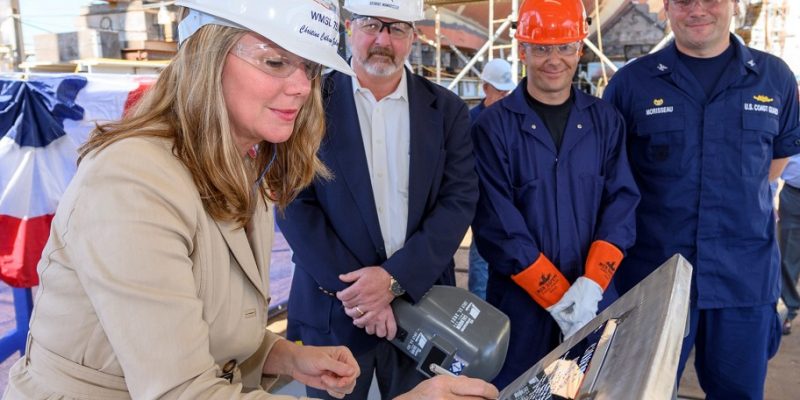 The keel authentication, initially planned for 2020, was postponed due to the COVID-19 pandemic.

“This is a very special keel authentication ceremony for a multitude of reasons,” said George Nungesser, Ingalls’ vice president of program management. “While we were able to work steadily and safely through the pandemic, visitation to the shipyard made commemorating major shipbuilding milestones a challenge. We are proud to be able to celebrate our talented shipbuilders and their successes today during this ceremonial keel laying.”

Calhoun recently reached the halfway point of its construction. Ingalls is the builder of record for the Legend-class NSC program and has delivered nine national security cutters with two more under construction.

The sponsor of Legend-class NSC 10 is Christina Calhoun Zubowicz, the granddaughter of Charles L. Calhoun.

“I want to thank the entire United States Coast Guard for this opportunity and recognize their fervent efforts in protecting America’s economic, national and border security,” Zubowicz said. “May abundant divine protection, luck and blessings surround the ship: and the men and women – the shipbuilders, in crafting the new innovative national security cutter, Calhoun.”

The Legend-class NSC is the most technologically advanced ship in the Coast Guard’s fleet, which enables it to meet the high demands required for maritime and homeland security, law enforcement, marine safety, environmental protection and national defense missions. NSCs are 418 feet long with a top speed of 28 knots, a range of 12,000 miles, an endurance of 60 days and a crew of 120.