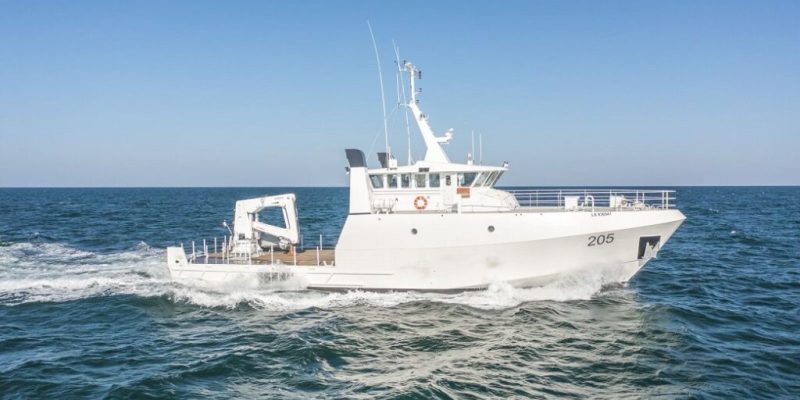 On October 12, Ocea announced a deal for an OSV 115 SC-WB vessel from the company’s auxiliary vessel fleet. “It would help the Nigerian Navy to complete its understanding of its maritime territory in support of the OSV 190 NNS Lana,” Ocea stated.

The OSV 115 SC-WB is intended for a variety of duties such as oceanographic/hydrographic operations/survey, oil spill operations, general patrol, search and rescue, and diving assistance.

A multibeam echosounder, a single beam echosounder, water collection, storage, and analysis equipment, and a wet laboratory will be carried on board. A 5.6-metre hydrographic boat outfitted for surveys in tiny and very shallow seas will also be carried.

The NNS Lana arrived in Nigeria on May 17th, replacing the former NNS Lana, which had been decommissioned a decade before. The vessel (A499) is specifically designed and manufactured to allow the Nigerian Navy to conduct hydrographic and oceanographic surveys. It can also conduct geophysical investigations, search and rescue missions, and patrol responsibilities. The ship is outfitted with survey equipment and a 7.6-metre boat for shallow water surveys. The ship is equipped with an Automatic Weather Station (AWS), wet and dry labs, scientific and technical workshops, and survey data operations and processing rooms.

Two MTU engines, three CAT main generators/one emergency generator, an electric propulsion system, and other auxiliaries are among the machinery. The electric propulsion, which operates at survey speed, is specifically installed to reduce data distortion caused by industrial noise. The ship has a top speed of 14 knots and a crew capacity of 50 people.

The two new hydrographic survey vessels will aid the Nigerian Navy’s Hydrographic Department in conducting hydrographic surveys and charting of the country’s seas. They will also provide Nigeria with the option to participate in the General Bathymetric Charts of the Oceans (GEBCO) Seabed 2030 project and the Global Multi-Resolution Topography (GMRT) synthesis project, which will ultimately help Nigeria meet its SOLAS obligations (International Convention for the Safety of Life at Sea).

Check out Naval Library App to find out more about the specifications of the Nigerian Navy’s survey vessels.