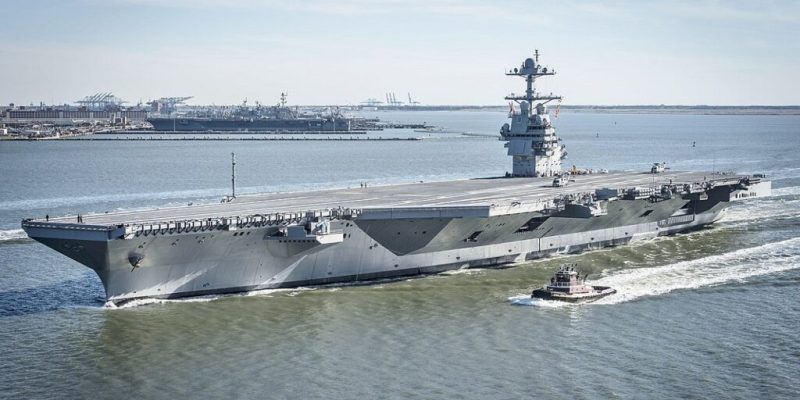 It takes generations of experience, hundreds of thousands of man-hours, years of preparation, and steadfast commitment to building an aircraft carrier. The USS Gerald R. Ford (CVN 78) is the culmination of years of construction and, before that, planning and design. Five thousand shipbuilders built this first-in-class ship in Newport News and thousands of suppliers around the United States.

The class, which will consist of 10 ships, will gradually phase out the Navy’s current carriers, beginning with the flagship ship, Gerald R. Ford, which will replace Enterprise and eventually phase out the existing Nimitz-class carriers. The new vessels have a hull similar to that of the Nimitz class but incorporate technologies developed during the CVN(X) or CVN-21 programs, such as the Electromagnetic Aircraft Launch System (EMALS), as well as other design features aimed at increasing efficiency and reducing operating costs, such as sailing fewer crew members.

The USS Gerald R. Ford was planned to save billions of dollars throughout its 50-year life. However, the Ford was built at the double the cost of the last carrier, and unanticipated expenditures and delays have plagued it. Onboard, there are eleven elevators, but only seven are fully functional. This ship cannot be certified for deployment until all 11 elevators are completed. The upgraded weapon lifts are just one of over two dozen powerful new technologies that contribute to the USS Ford’s cutting-edge status as a floating experiment.

The U.S. Navy accepted delivery of the ship in 2017 despite the ship’s deficiencies to meet that year’s budget constraints. However, after four years of testing, the carrier systems and technologies are still not ready for deployment until 2022. Nevertheless, according to Seapower, sailors aboard the aircraft carrier USS Gerald R. Ford (CVN 78) completed Combat Systems Ship’s Qualification Trials (CSSQT) on April 16, 2021, marking a significant milestone in certifying the ship’s capacity to defend itself and its crew. The trials, which began in February, were divided into five parts. The completion of the final phase, 2C, and the CSSQT as a whole is the result of years of planning, training, innovation, and thousands of work hours put in by the ship’s current and previous crews.

The aircraft takeoff and landing systems are two technologies that distinguish Gerald R. Ford distinct from other carriers. They are not incremental improvements but rather revolutionary advancements in terms of the electromagnetic airplane launch system.

The other carriers launch their jets from the deck using steam-powered catapults. However, the Ford uses electromagnetic linear induction motors comparable to high-speed maglev trains or roller coasters. The electromagnetic airplane launch mechanism alone cost over $1 billion in research and development.

The expense of installing it on the USS Ford was more than double what was anticipated. Thousands of moving pieces comprised the steam catapult system. An electromagnetic catapult has fewer than 100 moving parts. That was a significant improvement. Because there are fewer moving parts, there are fewer sailors to operate and maintain.

Compared to the preceding generation of aircraft carriers, the reduced crew and modern technologies were expected to save $4 billion for the aircraft carrier’s 50-year life span. In addition, the new technique places less strain on the planes, extending their life. Additionally, it can be used by a wider variety of aircraft, including some that are currently under development.

Landing and takeoff are also simplified for pilots, as a computer performs the work. First, the pilot relinquishes control of the aircraft to the computer. Next, it autopilots the airplane down to the carrier deck and then smoothly brings it to a stop when it comes into contact with the sophisticated arresting gear.

As a result, the pilot’s flight experience is significantly altered. It is considerably safer. Additionally, it will extend the aircraft’s life. Ford’s automated systems enable the takeoff and landing of lighter and heavier planes, which was previously impossible on older carriers.

Ford’s blend of innovative technologies enables it to land a wider variety of aircraft. In addition, the state-of-the-art technology and operating technologies would allow airplanes to takeoff faster and reach the action more quickly.

Check out Naval Library App to find out more about the specifications of the Ford-class aircraft carriers.