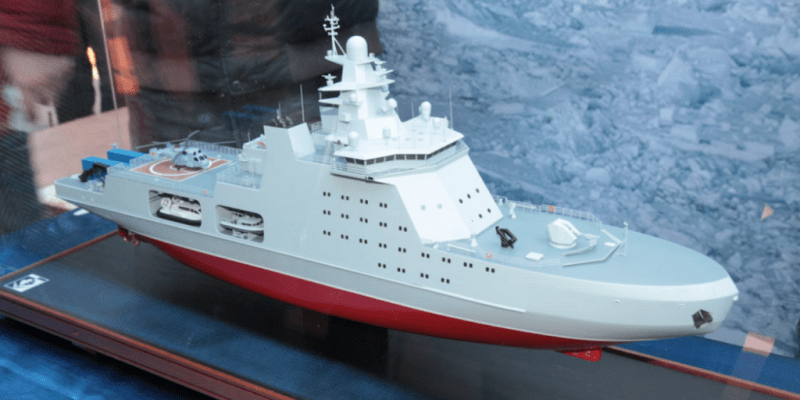 According to a report by the TASS news agency, the Ivan Papanin-class multirole icebreaking patrol ship being manufactured by Yugreftransflot can be armed with a Kalibr-K container-type cruise missile system.

“The Ivan Papanin-class vessel can carry a mobile Kalibr-K missile system. This will require three standard cargo containers that can be delivered to the ship and unloaded ashore by 40-tonne shipboard cranes,” the source of TASS explained.

The project supervisor explained that, due to the requirement to offload the mobile missile system onto the coast, a fourth container can be built aboard the icebreaker to employ the Kalibr-K fighting squad, which is now in transit.

The Ivan Papanin-class ships will be capable of sailing along the Northern Sea Route without icebreaker support thanks to its ice-reinforced hull, the Azipod electric propulsion system, and an ice-type radar station. The vessel will be able to promptly deliver modules with repair shops, medical and housing blocks, and also groups of specialists to research and military bases in the Arctic. The reefer ship will focus on delivering seafood from the Far East to European Russia.

In October 2019, the 8,500-ton ‘Ivan Papanin’ was launched in St. Petersburg. The ‘Ivan Papanin’ began construction in April 2017 and is scheduled to be completed in 2022 or 2023. Despite being an icebreaker, the 114-meter-long warship may be utilized not just as a patrol ship but also as a tug for other boats. Her hull is capable of withstanding ice up to 50cm thick.

Unlike other icebreakers, this ship will be strongly armed like any other missile ship. She will be armed with Kalibr cruise missiles and a 76.2 mm naval gun., and also boasts a helipad, with a hangar for a reconnaissance helicopter and bays for two Raptor-class speedboats. It has a capacity for 50 mission crew, in addition to the sailors and officers manning the ship herself, and has an endurance of 60 days, with a range of 6,000 nautical miles.

Check out Naval Library App to find out more about the specifications of the Ivan Papanin-class icebreaking patrol ships.