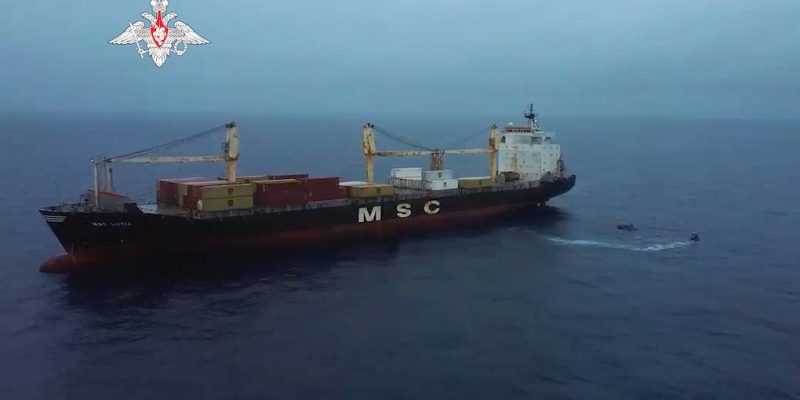 The container ship rescued by Russian marines in the Gulf of Guinea on October 25 had a crew of 22, according to Captain 1st Rank Stanislav Varik, Commander of the Russian Northern Fleet’s Naval Taskforce.

The Panama-flagged container ship Lucia, heading from Togo to Cameroon, was attacked by pirates in the Gulf of Guinea, according to the Russian Defense Ministry. After receiving a distress call, a Russian warship launched a helicopter carrying a marine corps team to free the ship.

“The vessel had a crew of 22: a Russian, a Romanian, and 20 Ukrainians. All of them are safe and sound. They hid in the vessel’s isolated cabin,” the commander said.

According to TASS, the commander stated that after receiving a signal from the international counter-piracy bureau about a vessel seized by pirates, he made a decision to send a helicopter there. The helicopter “flew to the designated area in complex weather conditions amid a powerful tropical storm,” he specified.

“The distance was over 80 km. Upon its arrival in the area, it spotted a fast-speed boat maneuvering along the side of the captured vessel. After hearing the sound of a helicopter and seeing it, eight pirates boarded the boat as the chopper approached the vessel and the boat began moving away with abrupt maneuvers at a high speed of over 30 knots,” the commander said.

The Russian naval taskforce switched to full combat readiness and anti-terror squads on board all the warships went on high alert, he elaborated.

“The naval taskforce began moving at the highest speed to the area where the vessel was spotted. The travel time was two and a half hours. The helicopter had to make a back flight to the warship for refueling and was preparing for its repeat mission, excelling all timed combat training requirements,” Varik stressed.

By that time, it was known that the vessel’s crew were not contactable, there was no one on the upper deck and the boat with the pirates had moved away by a considerable distance, he said.

“By that time, I had got in touch with the international counter-piracy bureau and informed them that we were getting in touch with the vessel and that the pirates had been edged out of the area and their activity halted,” the naval task force commander said.

The Russian marines had no information about whether any pirates had remained aboard the vessel, the commander said. “While approaching the vessel, the personnel took all precautionary measures. The assault and support groups were armed and instructed and boarded a fast-speed boat when the warship arrived at the area of the operation. The helicopter took off for the second time to provide fire support from the air. Control was exercised from a drone launched from the large anti-submarine destroyer [Vice-Admiral] Kulakov,” the 1st rank captain said.

The marines managed to get in contact with the container ship’s crew, he said.

“After that, the most complex and dangerous work began: the assault (fire) group boarded the vessel under the cover of the helicopter and the warship’s weapons. The warship stayed 300 meters from the captured vessel. The marines operated swiftly and professionally,” the commander said.

Six marines climbed the Lucia cargo ship and assumed positions along its board, following which they inspected the vessel for half an hour and freed the crew, he added.

“There are no injuries. All were safe and sound and climbed the upper deck to heartily welcome, thank and simply embrace the marines for their rescue,” Varik said.

An additional group consisting of an investigator and a prosecutor also boarded the civilian vessel freed from the pirates. The container ship is now being led by the group of warships at the captain’s request, the commander informed.

A task force from the Russian Northern Fleet has been on an anti-piracy mission in the Gulf of Guinea over the past three weeks. The task force consists of the rescue tug Altai, the medium sea tanker Akademik Pashin and the large anti-submarine warfare ship Vice-Admiral Kulakov. The Russian marines are providing security for shipping and monitoring the maritime situation using deck-based aviation.

Check out Naval Library App to find out more about the specifications of the Udaloy-class destroyers.