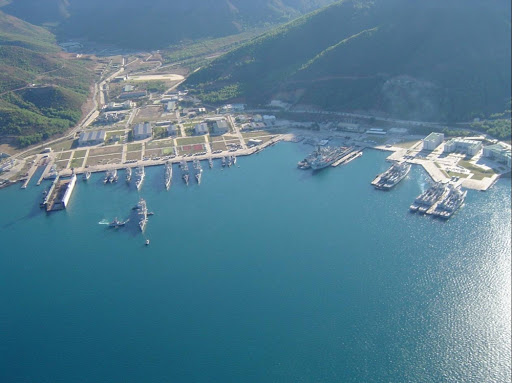 Russian frigate Admiral Kasatanov made a business call at the Turkish naval base Aksaz as part of its long-distance deployment, the Russian Ministry of Defence announced.

The visit will last until March 4. During the visit, the ship’s crew will replenish supplies of fresh water and food, and the personnel will take a break from carrying the sailing watch.

During the deployment in the Mediterranean Sea, Admiral Kasatanov visited Algeria, Greece, and Egypt.

At the rest of her deployment, Admiral Kasatanov is scheduled to make several more business calls to the ports of the Mediterranean region’s countries.

The rescue tug “Nikolai Chiker” has been supporting Admiral Kasatonov during deployment.

The ship left the main base of the Northern Fleet — Severomorsk-on December 30, 2020. During the long-distance campaign, she overcame more than 12.7 thousand nautical miles.

Before starting the campaign, military and civilian sailors and marines and other attached persons, were vaccinated against coronavirus infection with the Russian drug Gam-COVID-Vak (Sputnik V).

The last Russian warship visited Aksaz Naval Base was missile cruiser Marshall Ustinov, she visited the base in October 2019.

Admiral of the Fleet Kasatonov is the second frigate of Project 22350. The lead ship of this project, Admiral Gorshkov, was handed over to the Russian Navy in July 2018. In 2020, Admiral Gorshkov took part in tests of the new Russian hypersonic missile Zircon.

The Admiral Gorshkov class, Russian designation Project 22350 for the original and upgraded version armed with 16 and 24 VLS cells, respectively, is the newest class of frigates built by the Severnaya Verf in Saint Petersburg for the Russian Navy.

The frigates have an overall length of 130m, a beam of 16m, and a draft of 16m. They have operational ranges of more than 4,000 miles and a displacement of 4,500t. The maximum speed of the vessels is 30kt. They can accommodate about 200 crew members.

Gorshkov is the only Russian combat ship to be equipped with BrahMos missiles. BrahMos is a supersonic cruise missile developed by the BrahMos Aerospace, a collaboration between Russia and India.

To find out about Admiral Kasatanov frigate, check out Naval Library app.