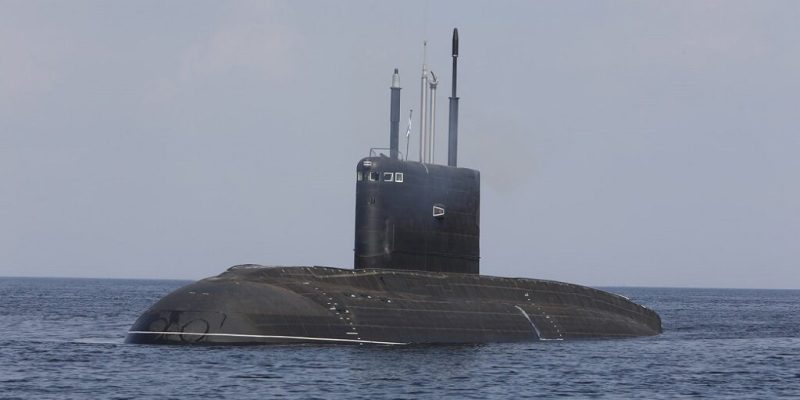 The Russian Navy received the Project 636.3 Magadan diesel-electric submarine on Tuesday. The St. Andrews flag, the Russian navy’s ensign, was raised on the submarine.

“For many years, the Russian Navy has been steadily building up its forces and enhancing its combat capabilities of groups of troops and forces. Today, the Russian Navy is being replenished. We welcome the cutting-edge warship – the Magadan submarine – into our fleet. This is the third submarine, built at the JSC Admiralty Shipyards for the Pacific Fleet,” Acting Chief of the Russian Navy Main Staff, Rear-Admiral Mikhail Neupokoev said at the flag-raising ceremony.

The Magadan submarine was laid down on November 1, 2019, floated out on March 26 this year in a high (91%) degree of readiness. The contract for the construction of the series was signed in September 2016.

The modified Project 636.3 series of six submarines were built at the JSC Admiralty Shipyards for Russia’s Pacific Fleet. The first submarine Petropavlovsk-Kamchatsky was delivered to the Russian Navy in December 2019, the second submarine Volkhov was floated out in December 2019 and is undergoing shipbuilders’ sea trials.

Russia claims that the Project 636.3 submarines are considered to be one of the world’s quietest submarines. Lengthwise, it measures 74 meters, with a displacement of over 3,900 tonnes, and a working depth of 240 meters. Its maximum operating depth is 300 meters, and its range is 7,500 miles.

Check out Naval Library App to find out more about the specifications of the improved Kilo-class submarines.

Russian warships hold missile firings in the Sea of Japan