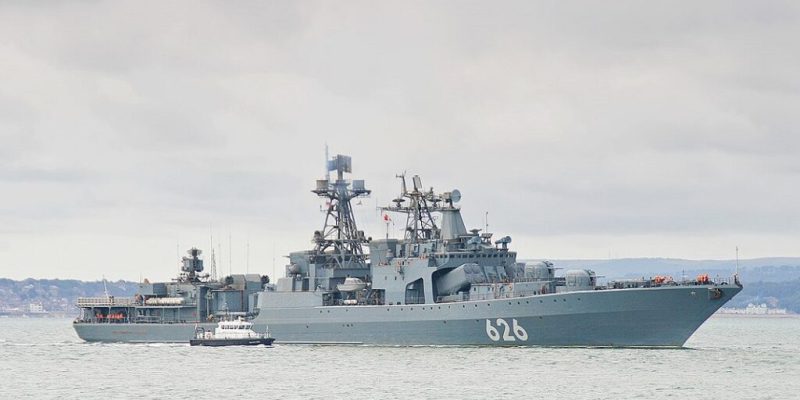 A task force of the Russian Northern Fleet deployed on an anti-piracy mission in the Gulf of Guinea in the eastern Atlantic Ocean practised releasing a fictitious pirate-seized vessel during drills, the Russian TASS Agency shared in accordance with the Fleet’s press office reports.

“The crews of the Russian large anti-submarine warfare ship Vice-Admiral Kulakov, the medium sea tanker Akademik Pashin and the rescue tug Altai held drills for freeing a notional vessel seized by pirates in the Gulf of Guinea of the Atlantic Ocean near the coast of the African continent,” the press office said in a statement.

The pirates hijacked a tanker, whose crew managed to hide in the vessel’s mechanical compartment and send a distress call, according to the training scenario. The Russian naval sailors assaulted the ship and successfully rescued its crew. The drills were supported from the air by a Ka-27PS helicopter that took off from the deck of the anti-submarine warfare ship Vice-Admiral Kulakov, according to the press office.

Following the practice of releasing the captive vessel, the crew of the huge anti-submarine warfare ship fired a 100mm AK-100 artillery cannon and a Kinzhal surface-to-air missile system at a target that imitated the pirates’ boat.

When the Russian Northern Fleet task force arrived in the Gulf of Guinea last week, it began its anti-piracy operation. The crews of the massive anti-submarine warfare ship Vice-Admiral Kulakov and the support vessels have been educated to provide potential help to sailors in difficulty in the ocean, according to the statement.

Vice-Admiral Kulakov, a huge anti-submarine warfare ship, set sail from the Northern Fleet’s major naval base in Severomorsk on June 28 for deployment in faraway waters. Initially, the crew took part in Russia’s Main Naval Parade off Kronshtadt this summer, and after that, they simulated certain episodes of their Atlantic deployment as part of a command and staff exercise for the Northern Fleet’s forces and personnel.

The Northern Fleet’s sailors operated in the Mediterranean Water from August 18 to September 23, making business calls in Algeria, Syria, and Cyprus as well as holding a series of drills for various sorts of defence for warships in transit by sea and practising hunting down a simulated enemy’s submarines. According to the press office, Vice-Admiral Kulakov has travelled almost 19,000 nautical kilometres since leaving its home naval port.

Check out Naval Library App to find out more about the specifications of the Udaloy-class destroyers.

Russian warships hold missile firings in the Sea of Japan