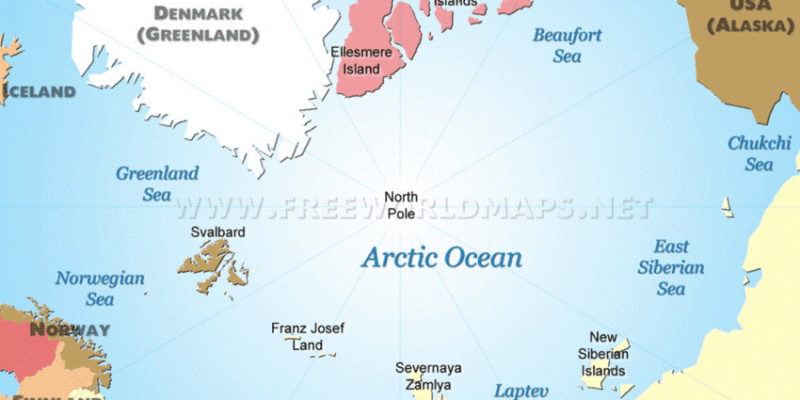 Arctic Region and its importance

The Arctic Region (also known as the North Pole) consists of 14.5 million square kilometers: including the borders of Greenland, Norway, Canada, and Russia. The North Ice Sea, which is accepted by the International Hydrographic Organization (IHO) as an ocean, includes the Beaufort Sea, the Barents Sea, the Black Sea, the White Sea, and Greenland, the Bering Sea.

The geopolitical environment for the Arctic Region has been substantially affected by the renewal of great power competition. The region holds an estimated 30% of the world’s undiscovered natural gas reserves, 13% percent of global conventional oil reserves, and one trillion dollars’ worth of rare earth minerals. Of the oil and gas reserves present in the Arctic, an estimated 84% likely reside offshore.

Therefore, the Pentagon needs to control the Arctic Region, which is rich in rare metals. The US naval forces’ activities, whose Arctic strategy was announced recently, will increase in the region.

Russia wants to dominate and control Arctic Region with submarines

Russia, as an Arctic country, is closely monitoring the increased activities of the US Navy in the Arctic Region.

Russia needs to control the region with submarines. Therefore, the Northern Navy conducts training to evaluate the effectiveness of submarines against surface ships.

The missile cruiser Marshal Ustinov, together with an Il-38 anti-maritime patrolling aircraft, found and destroyed a submarine of a simulated enemy in the Barents Sea, the Northern Fleet press service said.

“The training involved an IL-38 aircraft of a separate mixed air regiment of the Northern Fleet Air Force and Air Defence Association. The crew practiced setting up an anti-submarine barrier made of hydroacoustic buoys and issued targeting instructions to the cruiser’s command post,” the report said.

The press service specified that the cruiser’s combat crews practiced searching for the submarine and the conditional use of onboard anti-submarine weapons against it.

“Marshal Ustinov left Severomorsk on 9 February. The ship’s crew carried out an offshore combat training course elements and conducted exercises in air and anti-submarine defense of a contingent squadron of ships and vessels. The activity was the cruiser’s second extended voyage in 2021.

“Marshal Ustinov” – missile cruiser of project 1 164, laid down on 5 October 1978 at Nikolaev Shipyard under the name “Admiral of the Fleet Lobov,” launched on 25 February 1982, entered the Northern Fleet on 5 November 1986.

The U.S. considers the Arctic Region as an alternative solution to reduce its rare metal dependence on China to a reasonable level. Thus, the U.S. will rely on its naval power in the Arctic Region in line with the strategy it has determined before. The most effective platforms for Russia to restrict the activities of the U.S. activities are submarines carrying nuclear and ballistic missiles under the Northern Fleet’s command. Soon, we assume that the actions of surface ships and submarines of the Russian Navy will increase in the region because Russia has always been suspicious about U.S. activities close to its borders.

HMS Montrose seizes over $15 Million Worth of Narcotics