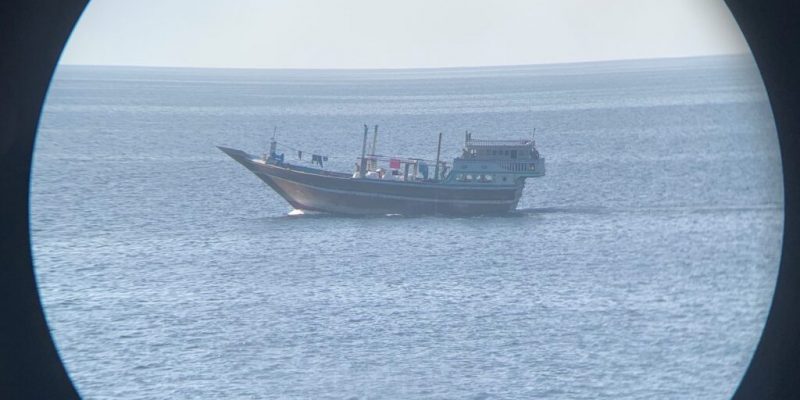 The Royal Navy has intercepted over 5300 lbs (2400 kg) of illicit drugs in the Arabian Sea.

The boarding team from HMS Montrose, operating under the command of CMF Combined Task Force 150 (CTF-150) found the drugs – with a combined estimated wholesale value of over $15 million (£10.9m) – following searches of suspicious vessels whilst undertaking a counter-narcotics patrol.

After taking command of the Combined Task Force 150 (CTF 150) in late January 2021, The Royal Canadian Navy has already overseen multiple significant successful interdictions, of which these two are the latest.

The last one was, USS Philippine Sea (CG 58)’s interdiction a shipment of more than 600 lbs. (275 kg) of suspected narcotics from a dhow in the international waters of the North Arabian Sea, Jan. 30.

CTF 150’s mission is to disrupt criminal and terrorist organisations and their mandated related illicit activities by restricting their freedom of manoeuvre in the maritime domain. CTF150’s activities deny criminal and terrorist organisations a risk-free method of conducting operations or moving personnel, weapons or income-generating narcotics and charcoal.

“As Commander of Combined Task Force 150, my team is resolute in our objective to promote security, stability and prosperity in an area which comprises some of the world’s most important shipping routes,” said Commodore Dan Charlebois, Commander of CTF-150.

“This interdiction was a direct result of the collaborative effort between Task Force staff and HMS Montrose, to whose crew I send my personal thanks for their skill, determination and professionalism in a challenging environment. I look forward to future successes as we continue to work together as close partners towards our common goals.”

HMS Montrose is the Royal Navy’s Forward Deployed Frigate and has been in the region since early 2019. The UK actively supports several operations and multi-national task forces in the Middle East in order to protect international and British interests.

HMS Montrose is the eighth of the sixteen-ship Type 23 or Duke class of frigates, of the Royal Navy, named after the Duke of Montrose. She was laid down in November 1989 by Yarrow Shipbuilders on the Clyde and was launched on 31 July 1992. She was commissioned into service in June 1994.

Check out Naval Library App to find out the specifications of Type 23 Class Frigates.