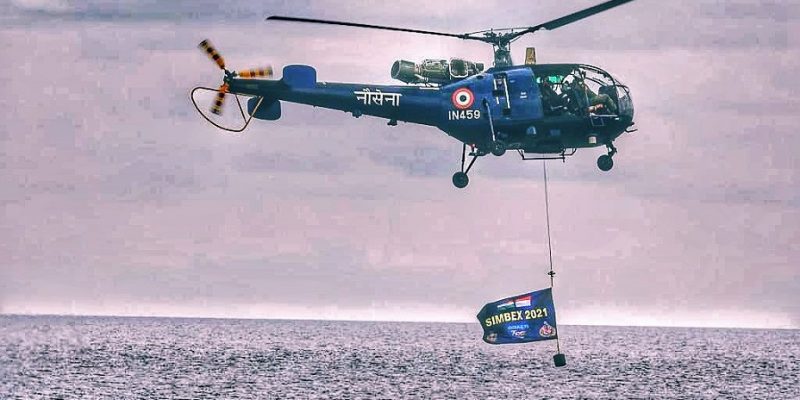 The Indian Navy has announced that the 28th edition of the Singapore-India Maritime Bilateral Exercise (SIMBEX) was carried out from September 02 to September 04, 2021.

The Indian Navy was represented by the guided-missile destroyer INS Ranvijay, which was equipped with a ship-borne helicopter, the anti-submarine warfare corvettes INS Kiltan and INS Kora, as well as one P8I Long Range Maritime Patrol aircraft. One Formidable Class Frigate, RSS Steadfast, which was equipped with an S-70B naval helicopter, one Victory Class Missile Corvette, RSS Vigour, one Archer Class Submarine, and one Fokker-50 Maritime Patrol Aircraft were among the ships that took part in the RSN’s deployment. Air Defence Drills were conducted in conjunction with the Republic of Singapore Air Force (RSAF), which sent four F-16 fighter aircraft to take part in the exercise.

SIMBEX, which began in 1994 and has been running continuously since then, is the Indian Navy’s longest-running bilateral maritime exercise with any foreign navy. Maintaining the continuity of this important engagement despite the challenges posed by the ongoing pandemic serves to highlight the strength of bilateral defence ties between the two countries. With these constraints in mind during the planning stages, both navies were able to execute several challenging evolutions with seamless and safe execution, including live weapon firing and advanced naval warfare serials, which included exercises in anti-submarine warfare, anti-air warfare, and anti-surface warfare, among other things. Ample evidence of the interoperability achieved between the two Navies can be found in the size and complexity of the drills.

This year’s SIMBEX is also a special occasion because it takes place during the ongoing celebrations marking the 75th anniversary of India’s independence from the United Kingdom. Having SIMBEX-2021 be a resounding success is yet another demonstration of the mutual determination on both sides to further strengthen their bilateral partnership in the years ahead.

Because of ongoing pandemic-related constraints, this year’s SIMBEX was planned as an “at-sea only” exercise hosted by the Royal Singapore Navy (RSN) on the southern fringes of the South China Sea, with no physical interactions.

Check out Naval Library App to find out the specifications of the Arleigh Burke-class destroyers.