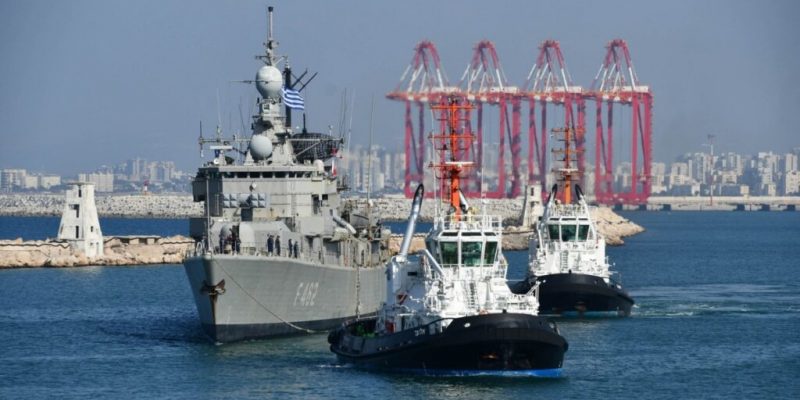 Standing NATO Maritime Group Two (SNMG2) has recently made a three-day port visit between 12-15 February to Haifa. After the visit, the maritime Group conducted a Passing Exercise (PASSEX) with Israeli Navy units in the Eastern Mediterranean, NATO Maritime Command announced.

During the visit, SNMG2 and Israeli Navy representatives carried out coordination meetings under strict COVID-19 prevention measures. Engagements included briefings to the Israeli Navy about NATO standard procedures, including towing ship maneuvers, among others.

On 15 February, SNMG2 units and INS Kidon and INS Sufa departed Haifa and executed a serialized exercise schedule. The PASSEX concluded with a ‘sail past to wish farewell to the units involved in the training.

“This PASSEX has been the second interaction between the Israeli Navy and NATO in less than three months. The cooperation between NATO and partners like Israel is essential to contribute to NATO’s success and increase the international community’s security. Sharing information as well as exercising together are essential tools to reach interoperability, reinforce cohesion and build trust between NATO and its partners”, said Rear Admiral Manuel Aguirre, Commander of Standing NATO Maritime Group Two.

“This visit was extremely beneficial for both sides. As we discussed common strategic issues between NATO Alliance and the Israeli Navy, as well as deepening the understanding of NATO protocols and procedures”, said Rear Admiral Guy Goldfarb, Commanding Officer of Haifa Naval Base.

“The Israeli Navy welcomes cooperation with NATO, which has noticeably increased in the recent years. I am confident that due to our common maritime interests and goals, the professional relationship between NATO and the Israeli Navy will continue to grow and strengthen,” he added.

As an active member of the Mediterranean Dialogue for more than 25 years, cooperation between Israel and NATO has included a broad spectrum of areas like search and rescue, humanitarian relief, border security, counter-terrorism, and medical collaboration.

SNMG2 will resume its program of activities in the Mediterranean, including participation in Dynamic Manta 2021, a major NATO anti-submarine warfare exercise, support to NATO Operation Sea Guardian, and continued cooperation with Allied and partner navies.

SNMG2 is one of four standing forces that comprise the maritime component of the Very High Readiness Joint Task Force (VJTF), which is part of the NATO Response Force (NRF). To respond to contingency situations, additional forces can be added to these groups, with the NATO command staff on board and the ships of the Group as the nucleus, capable of providing timely support to NATO operations.