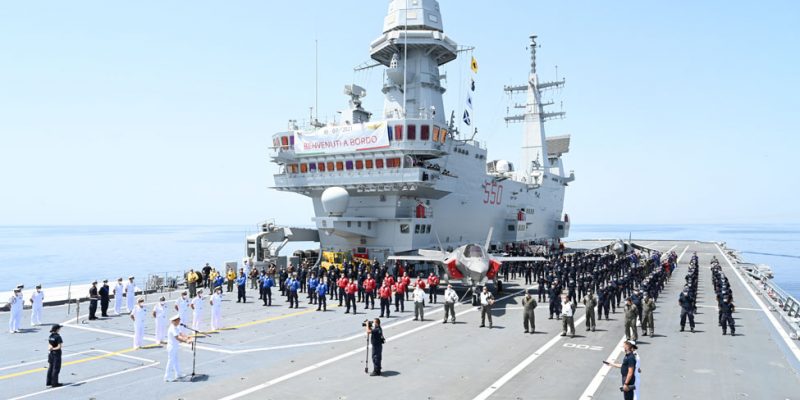 “Today, we are witnessing the landing of the first Italian Navy F-35 on the Cavour aircraft carrier: a significant step toward the strategic goal of providing Defense and Italy with an aircraft carrier capability with the latest generation of aircraft on board. A capability that propels us into an elite group of only a few countries in the world, elevating Italy’s status and international weight. “, said Chief of Staff of the Italian Navy, Admiral Giuseppe Cavo Dragone during the ceremony.

The arrival of the aircraft represents a significant step forward for the Navy in the process of replacing the AV-8B Plus Harriers, which have now reached the end of their operational life cycle, with the goal of obtaining an adequate number of aircraft and pilots trained to achieve the initial operational capacity, up to the acquisition of full operational capacity after the delivery of the last aircraft destined for the fleet by 2024.

Captain Giancarlo Ciappina, the ship’s commander, expressed his pride “for the aircraft carrier’s achievements, and I am grateful to the men and women of my crew since our January departure to the United States for the “Ready for Operations” campaign. The Navy makes an epochal leap in acquiring this capability, which will ensure the Navy’s and naval aviation’s long-term viability.”

The F-35 Joint Program Office has delivered a flight clearance recommendation to the Italian Navy for the safe operation of fifth-generation F-35B fighter aircraft on the ITS Cavour in March 2021. She arrived at Naval Station Norfolk on Feb 13 for a series of operations alongside U.S. military assets to attain the Italian Navy’s “Ready for Operations” certification to safely land and launch F-35B aircraft and started trials on March 1.

She returned to its homeport in Taranto on April 30, after three months of deployment for the Ready for Operations (RFO) Campaign.

The landing of the first F-35B is part of a strategic program that sees the Navy strengthen its intervention capacity. The result achieved has an even more significant value in the year of the 160th anniversary of the Navy, 10 years of use of the Cavour as flagship and 30 years after the first landing of the AV8B plus on the Garibaldi ship deck in far 1991.

Check out Naval Library App to find out more about the specifications of ITS Cavour.

By admin24 hours ago20 views