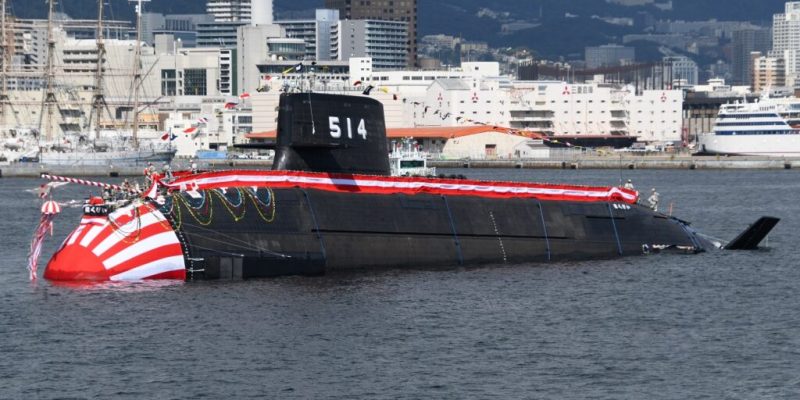 Japan’s newest submarine, stealthier and can stay submerged longer than comparable foreign submarines, was launched at a Kobe shipyard. On October 14, 2020, Defense Minister Kishi paid a visit to Mitsubishi Heavy Industries Kobe Shipyard to witness the launching of a new submarine. She was given the name Taigei, which translates as “huge whale.” Mitsubishi Heavy Industries is building the submarine, which is the first in the sophisticated Taigei-Class category. It is planned to enter service in March 2022, becoming the MSDF’s 22nd submarine.

Japan has launched the second submarine in the Taigei Class. The launch took place exactly one year after the lead boat was launched. The new submarine named the Hakugei, or White Whale, was unveiled at the Kobe-based Kawasaki Heavy Industries shipyard. The 3,000-ton, diesel-electric attack submarine with an 84-meter length is currently undergoing final optimization and sea trials. March 2023 is anticipated for commissioning into the Japan Maritime Self-Defense Force, or JMSDF.

Japan’s submarine construction process is iterative, with a new submarine class released typically every twenty years, building on previous classes. Thus, the Soryu class is a development of the previous Oyashio class, and the two classes together comprised the fleet until the arrival of the Taigei-class.

Currently, the JMSDF is the only naval service in the world to have this equipment deployed on a submarine. Lithium-ion batteries have nearly twice the capacity of lead-acid batteries. Lithium-ion batteries will enable the submarine to shut down its diesel-electric propulsion system and run entirely on battery power for extended periods underwater, considerably increasing underwater endurance.

That battery is significantly quieter than diesel-electric engines and lowers the acoustic signature subs, making discovery more difficult. Nevertheless, JMSDF is convinced that lithium-ion is the way to go and has invested significant effort in developing a suitable solution.

The Taigei-class is equipped with six HU-606 533 mm torpedo tubes capable of carrying Type 89 heavyweight torpedoes for anti-submarine operations and the UGM-84 Harpoon for anti-ship missions. Mitsubishi Heavy Industries Type 89 torpedo is a submarine-launched homing torpedo. It was designed to replace the unguided Type 72 torpedo. The Technical Research and Development Institute, a component of the Ministry of Defense, began development in 1970 and finished the design in 1984. It is derived from the Type 80 torpedo and is comparable to the US Mark 48 ADCAP torpedo. It entered service in 1989 after being formally approved and given the designation “Type 89.”

It is a wire-guided torpedo with active and passive homing capabilities. It is slightly longer and heavier than the Mk-48 torpedo but has a smaller warhead (267 kg compared to 295 kg). It can, however, be utilized at a higher depth (900 m vs. 800 m for the Mk-48).

McDonnell Douglas designed and manufactured the Harpoon, an all-weather, over-the-horizon anti-ship missile (now Boeing Defense, Space & Security). The submarine-launched model is equipped with a solid-fuel rocket booster encased in a container to allow for submerged launch via a torpedo tube. The missile travels at subsonic speeds and can strike targets more than 70 miles or 112 kilometers away.

Japan’s principal concern is a confrontational China with whom it has several disagreements. Chinese moves have compelled the Japan Maritime Self-Defense Force to be more proactive and take countermeasures. The Chinese Navy has grown enormously in size and capability throughout the years. China has made considerable strides in the design and delivery of modern warships.

Taigei-Class submarines are part of an extensive Japanese naval modernization and expansion program inspired by the relentless provocations of Beijing and Pyongyang. Small, silent submarines are extremely difficult to detect and would be an excellent response against the People’s Liberation Army Navy. With this scenario in mind, it’s easy to see how the fleet of Taigei class submarines, in addition to the Soryu-class submarines, will be critical in thwarting any Chinese assault.

Check out Naval Library App to find out more about the specifications of the Taigei class submarines.

By OTC8 hours ago20 views

By OTC8 hours ago20 views