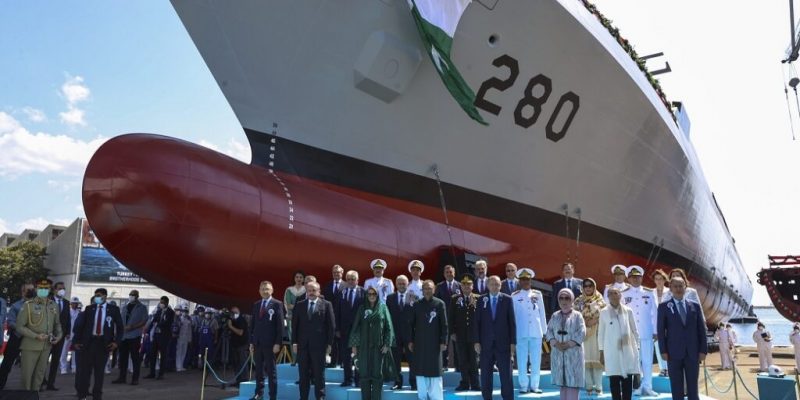 The first PN MILGEM-class corvette, PNS Babur (F-280) built in Turkey for the Pakistan Navy was launched on August 15 during a ceremony at the Istanbul Military Shipyard. The event was attended by Turkish President Recep Tayyip Erdoğan and his Pakistani counterpart Arif Alvi.

Following the ceremony, the first steel of Turkey’s first offshore patrol vessel, the future TCG AKHISAR, was cut to mark the start of construction.

“Four MILGEM class corvettes will be built for the Pakistan Navy as part of the project that has brought us together today. Two of these will be manufactured in our country and two in Pakistan. Additional technology and equipment for use in corvettes will be chosen from our country’s defense industry products,” said the Turkish President said in his speech during the ceremony.

MILGEM project is a national warship program of Turkey. Managed by the Turkish Navy, the project aims at developing multipurpose corvettes and frigates that can be deployed in a range of missions, including reconnaissance, surveillance, early warning, anti-submarine warfare, surface-to-surface and surface-to-air warfare, and amphibious operations.

The contract for four MILGEM class corvettes for Pakistan Navy with concurrent Transfer of Technology (ToT) was signed with ASFAT Inc, a Turkish state-owned Defence contractor, in 2018. The ToT entails constructing two corvettes at Istanbul Naval Shipyard while another two at Karachi Shipyard & Engineering Works (KS&EW).

MILGEM vessels are 99 meters long with a displacement capacity of 2,400 tons and can sail up to 29 knots. Corvettes are medium-sized boats bigger than ordinary patrol boats and smaller than warships but can be used for any military purpose. It has the capabilities to be used in any warfare missions.

The vessel is equipped with state-of-the-art weapons & modern sensors, including surface to surface, surface to air missiles, anti-submarine weapons and Command & Control system. Induction of this ship in the Pakistan Navy would significantly add to the lethality of the Pakistan Navy’s capabilities and contribute to maintaining peace, security and balance of power in the Indian Ocean Region. These Ships are being constructed as per modern Naval Ship class standards with stealth features.

Check out Naval Library App to find out the specifications of the PN MILGEM-class corvettes.

Soryu Class Submarine: Are they the best diesel-electric attack submarines in the world?