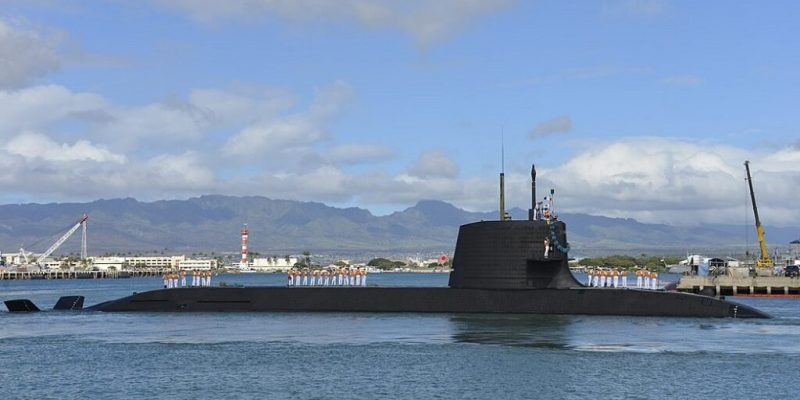 The Soryu-Class, sometimes known as the 16 SS-class, is a diesel-electric assault submarine that is one of the best. These incredibly quiet and capable submarines are the backbone of the Japan Maritime Self-Defense Force’s submarine forces and one of the most crucial chess pieces on the chessboard in the East Pacific.

The long-standing submarine tradition of Japan laid the way for the development of a good submarine like the Soryu-Class.

A Brief of the History of Japanese Subs

During the 1904 Russo-Japanese War, Japan received its first submarines. The Japanese had made significant investments in undersea boats prior to WWII. Their qualities were excellent, but the navy had only a small number of them. Moreover, the Imperial Japanese Navy deployed its submarines against the US Navy’s surface combatants during the war, not for commerce raiding. As a result, the Japanese submarine operations, like Germany and the United States, were not very successful. Despite this, the Japanese submarines were able to sink three carriers and many destroyers and cruisers.

The Soryu-Class is simply a modified version of the Oyashio-class with air-independent propulsion, shortly AIP. The first vessel of this class, JS Sōryū, was laid down in 2005, launched in 2007, and commissioned in 2009. The complement of the Sōryū-class is 65-person. The submarine has 84 meters, a beam of 9.1 meters, and a draught of 8.5 meters. Its surfaced displacement is 2,900 tons, while its submerged displacement is 4,200 tons.

The propulsion system consists of two 8,000 horsepower Kawasaki 12 V 25/25 SB-type diesel engines and four 3,900 horsepower Kawasaki Kockums V4-275R Stirling engines. Its maximum surfaced speed is 13 knots, while its maximum submerged speed is 20 knots. The Sōryū-class can reach a range of 11,300 kilometers at a speed of 6.5 knots. The submarine has a maximum diving depth of 650 meters. It has six 533mm torpedo tubes, and it can launch the Type 89 torpedoes and UGM-84 Harpoon missiles.

Japan built 12 Sōryū-class submarines. But, the last two, JS Ōryū and JS Tōryū do not have the Stirling AIP. There are no dimensional changes between these two types. The teardrop hull design of the Sōryū-class significantly reduces the hydrodynamic drag on the submarine when submerged. This hull form provides better underwater performance. Also, low hydrodynamic drag means low noise. So, the teardrop design allows the long side array sonar to be directly fixed to the pressure hull while making the boat hard to be detected by sonars.

Yet, this hull form, which is patterned after the bodies of whales, decreases the sea-keeping capabilities and increases drag while surfaced. Like the Oyashio-class, the entire hull of the Sōryū-class is equipped with underwater sound absorbing and reflecting materials. Also, its sail is tilted to reduce the target strength, which measures the area of a sonar target. Thus, the Sōryū-class ultimately reflects the incident sound in a direction different from the sound source. Japan is one of the countries, which has invested the underwater noise-reduction works the most. During an exercise in 1983, the JMSDF realized that the latest detection systems on the P-3C Orions could easily detect the submarines, even it stopped. It was a significant shock to the submarine forces, and the reduction of underwater noise became a top priority. As the result of these works, started in the early 1980s, the Sōryū-class became one of the most silent submarines in the world.

The Sōryū-class has an X-shaped stern combination of diving planes and rudders. The previous Japanese submarines had been equipped with a cross-shaped rudder, which consisted of a vertical rudder for turning and a horizontal rudder for depth control. Thanks to the new design, all four control surfaces can now be used for riding and depth control. This design provides superior maneuverability to the Sōryū-class. Besides, if one of the control surfaces is damaged, the other three can control the maneuver horizontally and vertically.

First submarines with the lithium-ion battery

JS Ōryū and JS Tōryū, which do not have the Stirling AIP, are the first submarines in the world equipped with the lithium-ion battery. The development works on it as a storage battery for the next generation of submarines began in 1987. Compared to conventional lead-acid batteries, lithium-ion batteries do not have the danger of hydrogen gas generation. Also, they provide more than twice the energy density per weight volume and 1.5 times more times of repeated charging and discharging. Their charging time is shorter.

The Sōryū-class is equipped with the CM010 optronics mast, which does not require a periscope tube. Thus, it freed design space during construction and limiting risks of water leakage in the event of damage. In addition, the optronics mast, also known as photonics mast, does not need to be located directly above its user, and it requires only a tiny pressure hull penetration for cabling.

The primary sensors and weapons of the Sōryū-class are connected by a Local Area Network (LAN). So, crew members can share more data quickly, and the common operational picture can be generated immediately. The main armament of the Sōryū-class is the 533mm active/passive acoustic homing Type 89 torpedoes. This wire-guided torpedo can reach a range of 50 kilometers at a speed of 40 knots or 39 kilometers at a rate of 55 knots. Its maximum adequate depth is 900 meters. Type 89 has a 267-kilogram warhead.

Now, Japan is working on the new 533mm Type 18 torpedo. Unlike Type 89, it has an acoustic image sensor that can identify the shape of the target and distinguish it from the decoys. In addition, the torpedo is equipped with an active magnetic proximity fuse that is also effective for decoy identification. It is also highly effective in coastal and shallow waters. Japan expected to get its first Type 18s in 2021.

Considering its unique and innovative features, the Sōryū-class is one of the best diesel-electric attack submarines in the world. It is undoubtedly a game-changer in the region.

Check out Naval Library App to find out the specifications of the Soryu-class submarines.