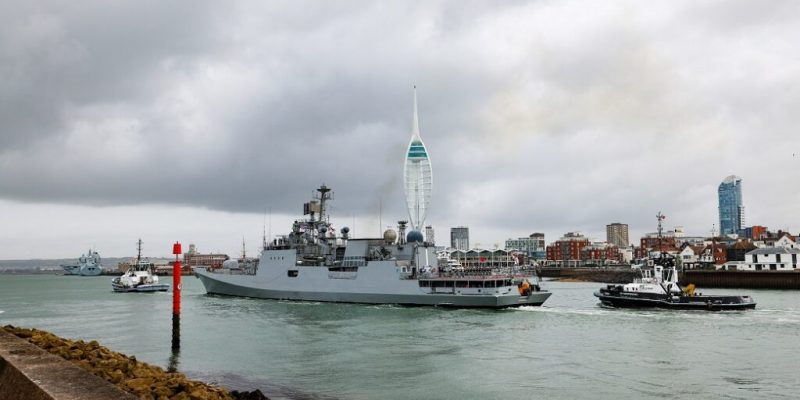 Indian frigate INS Tabar arrived at Portsmouth on 13 August for a high-profile visit ahead of exercises with the Royal Navy, according to a press release issued by the Royal Navy.

The INS Tabar, whose name means “battleaxe” in Sanskrit, arrived in the Solent after spending a few days training with the Norwegian Navy in Bergen.

While in Portsmouth, members of the ship’s 300-strong crew will pay their respects to the fallen of World War I and II, who are remembered on the Naval Memorial on Southsea Common.

Prior to their country’s independence in 1947, Indians served with distinction in all theatres of war, with the then-Royal Indian Navy numbering 20,000 personnel at its peak in WW2.

And on Sunday, the Tabar, like Indians all over the world, will commemorate the 75th anniversary of their country’s independence from the British Empire.

The frigate will ‘dress ship,’ flying a colourful array of flags from bow to stern, and will host a reception for dignitaries, led by India’s High Commissioner to the United Kingdom, Gaitri Issar Kumar.

Fleet Commander Vice Admiral Jerry Kyd also visited the Tabar while it was berthed at Portsmouth Naval Base to discuss reinforcing the strong bond between the two navies.

Both navies regularly exercise together – usually in the Indian Ocean, but less frequently around the UK – and with the Indo-Pacific region becoming increasingly important to Britain, such collaboration is likely to grow.

“I am delighted to be visiting INS Tabar while she is alongside in Portsmouth and grateful for the opportunity to meet with the High Commissioner,” Admiral Kyd said.

“The Royal Navy enjoys a mutually beneficial relationship with our Indian colleagues and one which runs deep and is highly valued.

“Recent engagement – encompassing ten ships and two submarines in the Bay of Bengal is a fantastic example of the level of cooperation between our two nations at sea.”

Check out Naval Library App to find out the specifications of the Talwar-class frigates.

Soryu Class Submarine: Are they the best diesel-electric attack submarines in the world?