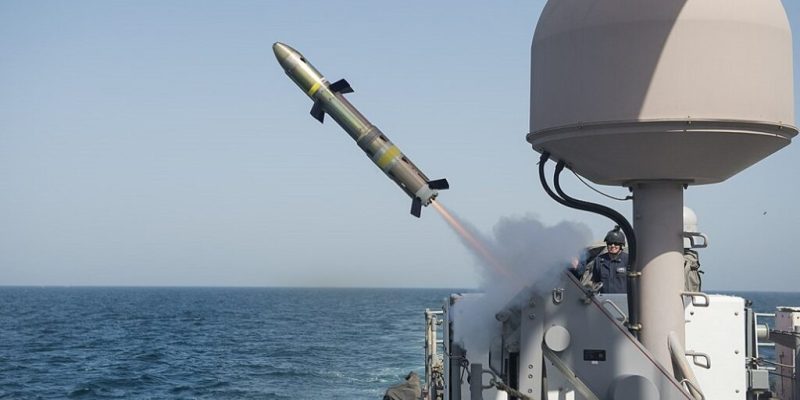 The USS Firebolt, USS Thunderbolt, USS Tempest, USS Chinook, USS Hurricane, and USS Whirlwind participated in the exercise, as did the expeditionary mobile base ship USS Lewis B. Puller guided-missile destroyer USS Michael Murphy. This is interpreted as a message to Iran.

The strait is roughly 21 nautical miles (39 km) wide at its narrowest point. Around 33% of global liquefied natural gas output and over 20% of total global oil production travel through the strait, making it one of the most vital maritime routes. However, it is something of a chokepoint due to its narrow width. Small missile boats and rapid assault craft capable of maneuvering effectively in these seas can be used to harass both massive warships and commercial vessels.

Iran has invested in several small vessels and has developed strategies to deploy them effectively in the strait. The Iranian fleet has ships with machine gun turrets, missile boats as well as catamaran-type crafts. On Sep 11, 2008, the Washington Institute for the Near East Policy said that in the two decades since the Iraqi imposed war on Iran, the IRGC or Islamic Revolutionary Guard Corps has excelled in naval capabilities and can wage unique asymmetric warfare against larger naval forces. According to the report, the IRGC Navy has been transformed into a highly motivated, well-equipped, and well-financed force and effectively controls the world’s oil lifeline, the Strait of Hormuz.

The MK-60 Patrol Coastal Griffin Missile System is a surface-to-surface missile system intended to defend ships from small boat swarms. It is developed from AGM-176 Griffin, which is designed to be launched from the ground or air. In September 2013, Raytheon and the U.S. Navy demonstrated the Griffin missile’s ability to engage fast-moving small boats from various platforms throughout a series of at-sea tests. In addition, the MK-60 Patrol Coastal Griffin Missile System was integrated on a Cyclone-class patrol ship, which used it to hit remote-controlled boats simulating a threat to the vessel.

The MK-60 achieved initial operational capability (IOC) with the U.S. Navy in March 2014. The MK-60 includes the Griffin missile, a laser targeting system, a US Navy-designed launcher, and a battle management system. Each Mk-60 can launch four missiles, and a patrol ship has two MK-60 launchers on board.

Arming Patrol Crafts with Griffin missiles adds a layer of defense to the vessel beyond the range of their 25 mm gun mounts, out to 4.5 km, and also provides 360-degree coverage. The missile is equipped with a Blast-fragmentation warhead of 5.9 kg and has thrust-vectoring engines that can move the rocket to its target even when launched vertically. Installation onto a vessel involves adding the launcher and weapons control system, the BRITE Star II sensor/laser designator, and the Griffin B Block II missile in a process taking one month.

The timing of the live firing exercise is critical. This particular U.S. Navy weapons training occurred days after Iranian Islamic Revolutionary Guard Corps speed boats surrounded the USS The Sullivans (DDG 68), an Arleigh Burke-class guided-missile destroyer, and a Vietnamese-flagged oil tanker. Iranian forces on helicopters landed aboard the oil tanker and sailed it back to Iran during this confrontation. Iran asserts that it captured the oil ship as part of a mission to defend it against an act of piracy by the U.S. Navy. The U.S. Navy refuted this assertion, stating that it was simply seeing Iranian soldiers seize the tanker.

The area of operations of the United States Fifth Fleet spans the Persian Gulf, the Gulf of Oman, the Red Sea, and portions of the Indian Ocean and includes the three crucial choke points of the Strait of Hormuz, the Suez Canal, and the Strait of Bab al Mandeb. Therefore, the Griffin Missile shot, which was made to eliminate the asymmetrical surface threats that move at high speed and in the form of a swarm, can be considered an important message was given to Iran.

Check out Naval Library App to find out more about the specifications of the Cyclone-class patrol ships.