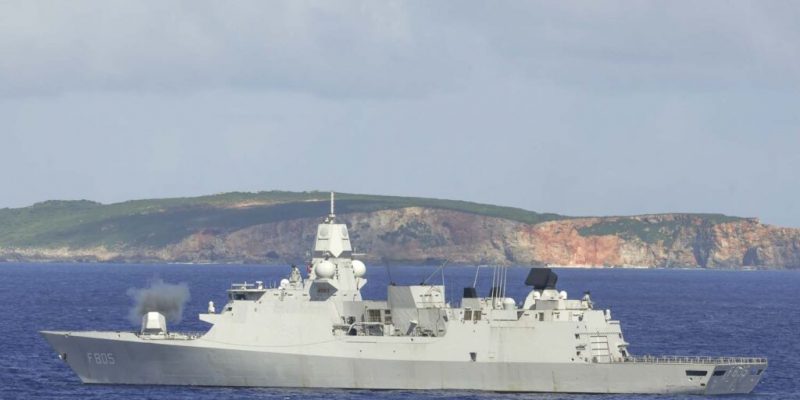 F-35 stealth jets and warships of the UK’s Carrier Strike Group (UKCSG-21) unleashed their firepower during high-octane live firing exercises with US allies as the Indo-Pacific leg of their global deployment ramps up another notch.

HMS Queen Elizabeth, HMS Kent, HMS Defender and HNLMS Evertsen of the CSG – which is currently on a seven-month deployment to Indo-Pacific and back – linked up with the Expeditionary Strike Group 7 and the 31st Marine Expeditionary Unit in the Philippine Sea in waters close to an uninhabited tropical island for two days of intensive gunnery training.

Weapons launched by three F-35 jet squadrons (two from HMS Queen Elizabeth and one from the amphibious assault ship USS America) and naval guns from HMS Kent, Defender, and HNLMS Evertsen targeted the Farallon de Medinilla island in the Mariana Islands in the western Pacific.

The training wrapped with F-35B, mortars and naval gunfire being coordinated together in an impressive showing of firepower.

Lieutenant Commander Conrad Rolfe, one of HMS Kent’s Principal Warfare Officers, said: “It was fantastic to demonstrate the ability to coordinate joint fire support with US Expeditionary Strike Group 7 today, making use of ships from the UK and the Netherlands, as well as F-35Bs. And what an amazing way to conduct my first live Medium Calibre Gun firing.”

US Marines landed on the island and set up mortar positions, before establishing radio communications with the force of allied ships spread out across the waters west of the island.

From there, the marines radioed in targets for Kent, Defender and Evertsen to launch salvos at from their naval guns, the 4.5in Mark 8 for the British ships and Oto Melara 127 mm/54 dual-purpose gun of the Dutch ship.

“It was a privilege to take part in this joint exercise which showed how HMS Defender can quickly and seamlessly integrate into any multi-national task group and contribute effect,” said Commander Vincent Owen, Defender’s commanding officer.

“It is seldom that this variety of nations and weapons systems have the opportunity to train together.

“It was awesome to witness the combined firepower of ground, air and naval fires – a real show of force.”

Check out Naval Library App to find out the specifications of the UKCSG-21 Assets.