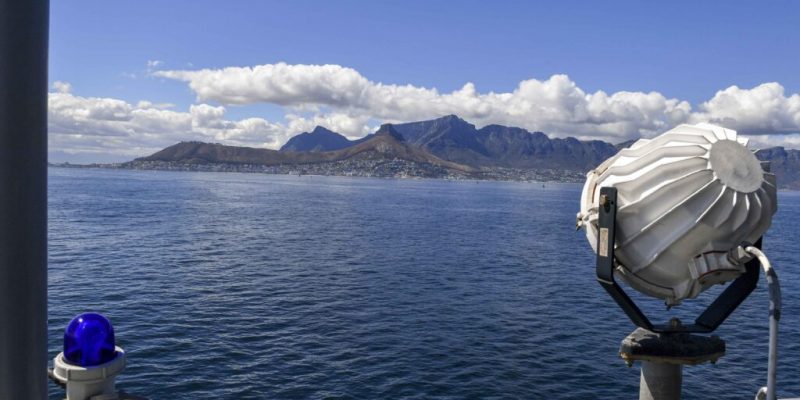 The US Navy’s Expeditionary Sea Base USS Hershel “Woody” Williams (ESB 4) arrived in Cape Town, South Africa on Feb. 20, 2021 for a planned port visit, the U.S. Navy’s 6th fleet announced with a press release. The visit builds on U.S. maritime partnerships with African nations and improves maritime safety and security in the region.

The USS Hershel “Woody” Williams is the second U.S. ship to stop in Cape Town in the last 12 months. The USS Carney had a port visit with public events in Seychelles just before coming to Cape Town in March of 2020.

“As we are for trade and investment, the United States is a strong security partner for South Africa,” said Acting U.S. Consul General in Cape Town, Will Stevens. “This visit by the USS Hershel “Woody” Williams is one more step in bolstering our already strong security cooperation.”

The stop will also allow a restock for fuel and re-supply for the ship. Due to COVID-19 safety precautions, there will be no public visits to the ship and the crew will not have the opportunity to visit this historic and renowned city.

“We at the U.S. Consulate General are delighted that Cape Town is hosting the ship’s resupply stop, as we firmly believe that working together to promote international security will lead to greater prosperity and security for our two nations,” Stevens said.

She is designed to support low-intensity missions, allowing more expensive, high-value amphibious warfare ships and surface combatant warships to be re-tasked for more demanding operational missions for the U.S. Navy. These ESB variants are slated to operate in the Middle East and the Pacific Ocean.

She is outfitted with support facilities for its mine-sweeping, special operations, and other expeditionary missions. An accommodation barge will also be carried to support up to 298 additional mission-related personnel. Their aviation facilities include a 52,000 sq ft (4,800 m2) flight deck with landing spots for two heavy-lift transport CH-53 helicopters, as well as additional deck space for two more CH-53s. The addition of a flight deck makes the ship more top-heavy, and so less stable in heavy seas. The deck is made with two operating spots and two parking spots, plus room to store two in the hangar. The mission deck’s ability to submerge to launch landing craft was disabled and instead a crane, capable of carrying 11 metric tons (12 short tons) and moving a 41 ft (12 m) boat in up to sea state 3, carries watercraft, towed arrays, and unmanned vehicles into the water.

The USS Hershel “Woody” Williams is currently conducting operations in the U.S. Sixth Fleet area of operations, which covers approximately half of the Atlantic Ocean, from the Arctic Ocean to the coast of Antarctica, and nearly the entire continent of Africa.