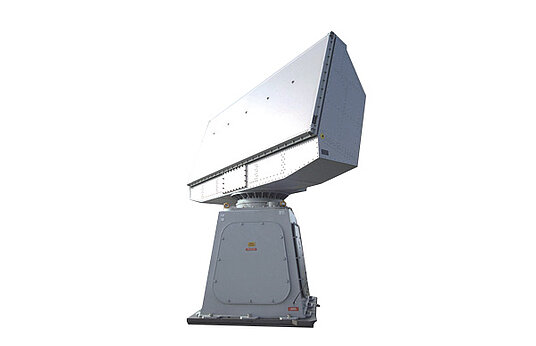 Sensor solutions provider HENSOLDT is modernizing the TRS-3D radars of two K130-class corvettes of the German Navy, as well as an associated shore facility, the company announced. The Federal Office of Bundeswehr Equipment, Information Technology and In-Service Support (BAAINBw) placed an order for corresponding electronic components. The replacement deliveries will take place this year.

The TRS-3D is a three-dimensional multimode ship radar for air and sea surveillance, which can correlate the position and movement data of targets with the HENSOLDT identification system MSSR 2000 I and improve the automatic identification of ships and aircraft.

It is an entirely coherent multimode phased array C band radar capable of fully automatic detection, track initiation, and classification of various types of targets. Even under severe clutter conditions encountered in the littoral, it detects and tracks with a particular emphasis on small, fast, and low-flying aircraft, missiles, hovering helicopters, and asymmetric threats. This ensures minimal operator workload and maximizes operational effectiveness.

TRS-3D supports the full operational capabilities of several self-defense missile systems. It can serve as a standalone radar for the surveillance and self-defense requirements of single-radar ships operating in coastal waters or self-defense radar on large frigates and multi-radar ships. For weapon support and target assignment, TRS-3D supplies reliable target data instantaneously. It features a high tracking accuracy to permit the deployment of different missiles against aircraft and anti-ship missiles.

The TRS-3D is the global market leader in its class, with more than 60 radars in service with navies and coastguards worldwide. In addition to K130 corvettes, vessels equipped with it include: