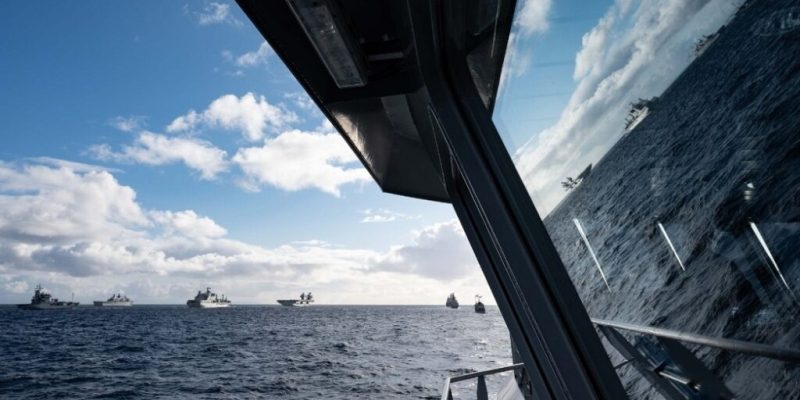 The two-week NATO exercise Dynamic Mariner 21/ Joint Warrior 21-2 off the coast of Scotland came to a close on Wednesday, September 29th.

It is part of the certification process for the NATO Response Force Maritime Component (NRF/M) for 2022. Dynamic Mariner 21/ Joint Warrior 21-2 is a live exercise for Maritime Force Integration that took place in June of this year. The NATO Response Force, established in 2002, is a multinational force that is highly prepared and technologically advanced.

It is comprised of land, air, marine, and Special Operations Forces components, and it provides collective defense as well as swiftly deployable elements. As well as providing a rapid response to an emerging crisis, it also supports peacekeeping operations, essential infrastructure protection, and disaster relief efforts.

In order to keep our nations secure in an unpredictable environment, we must regularly exercise and practice with actual circumstances in order to maintain readiness. We accomplish this by collaborating to guarantee that we are always prepared to respond to any existing or future threat.

The drill took place in the Minch, which is a body of water off the coast of Northwest Scotland, as well as on UK land and airspace.

Twenty-one surface ships, one submarine, seven maritime patrol aircraft, other air assets, and personnel from twelve countries participated in the exercise. They were from the following countries: Belgium; Canada; Denmark; France; Germany; Latvia; the Netherlands; Norway; Portugal; Spain; the United Kingdom; and the United States.

Dynamic Mariner 21 was coordinated by the NATO Maritime Command and the Royal Navy’s Joint Tactical Exercise Planning Staff. It was the first of its kind.

NATO’s maritime strength lies in the ability of the Standing Forces and National Response Force elements to rapidly join with high readiness, high capability national forces and task groups. Regular training between these groups is a force multiplier and provides a collectively trained and interoperable capability that NATO can confidently deploy if necessary.

“Dynamic Mariner was another opportunity to work with allied navies, learn and understand each unit’s capabilities and maximize interoperability within the task group,” said Commodore Bradley Peats, Commander of SNMG1. “To keep our nations safe in an unpredictable world, we need to be constantly exercising and training with realistic scenarios. We do this by working together to ensure we remain ready to respond to any current or future threat.”

The Naval Cooperation and Guidance for Shipping (NCAGS) and Allied Worldwide Navigational Information System (AWNIS) organisations participated in the exercise. In order to support the Military Commanders objectives whilst providing consideration to how the merchant shipping industry operates in the region, a Staff Officer NCAGS and a Safety of Navigation Information Coordinator was placed with the United Kingdom Maritime Component Commander for the exercise. Two AWNIS liaison officers embarked with the Mine Counter Measures Force and one with the Netherlands Amphibious Group.

The NATO Shipping Centre, a permanent element of Allied Maritime Command, and NATO’s Single Point of Contact with the merchant shipping industry had a number of augmentees from across the nations, in order to provide support and act as an Information Fusion Centre for merchant shipping issues.

A Deployed NCAGS Element (DNE) was set up in Newcastle, hosted by the Royal Navy Reserve Unit HMS CALLIOPE. The DNE briefed merchant shipping in the ports of Tees, Tyne and Blyth on NCAGS, AWNIS, the NATO Shipping Centre, Operation Sea Guardian, and Maritime Security in the Mediterranean. Through these briefings, the DNE was able to establish areas of mutual interest with the industry and continue to promote cooperation between military and civil maritime authorities.

Collective defence remains the Alliance’s greatest responsibility and deterrence is a core element of NATO’s overall strategy – preventing conflict and war, protecting Allies, maintaining freedom of decision and action, and upholding the principles and values it stands for.