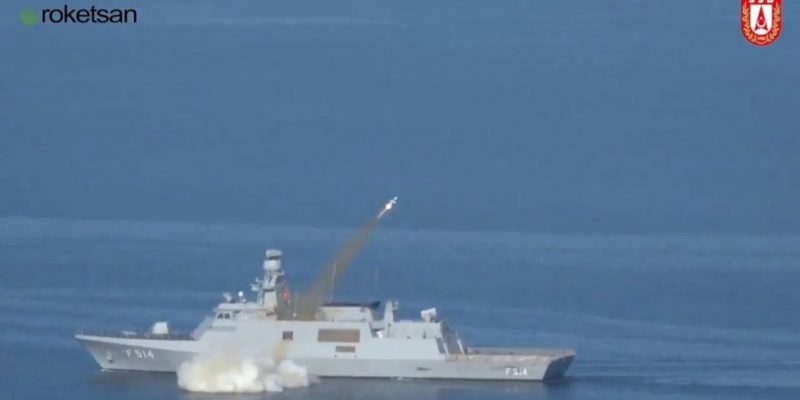 Turkish Navy has conducted the final test-fires of indigenous anti-ship missile “ATMACA” on 3 and 4 February in the Black Sea. 4th Milgem-class corvette TCG KINALIADA was launching platform. The first missile was launched with telemetry on February 3, and the second one conducted Initial Operability Test (IOC) on February 4.

Chief of the Turkish Navy Admiral Adnan Ozbal attended the tests. These tests were the final ones before the mass production; Atmaca is expected to enter service for the Turkish Navy in 2021.

Developed by Roketsan Co., Atmaca is a high precision, long-range, surface-to-surface, precision strike anti-ship missile which can be integrated into frigates and corvettes.

It is a subsonic, sea-skimming guided missile that is effective against fixed and moving targets due to its resistance to countermeasures, target update, re-attack, and task cancellation capabilities, and advanced routing system (3D routing). It can carry a 250kg class high explosive fragmentation warhead.

The ATMACA missile prototypes with Aselsan active RF Seeker, capable of anti-ship and land-attack capabilities, were highly successful in the fire tests performed in 2016, and it was stated that the prototypes reached ranges of over 200 km.