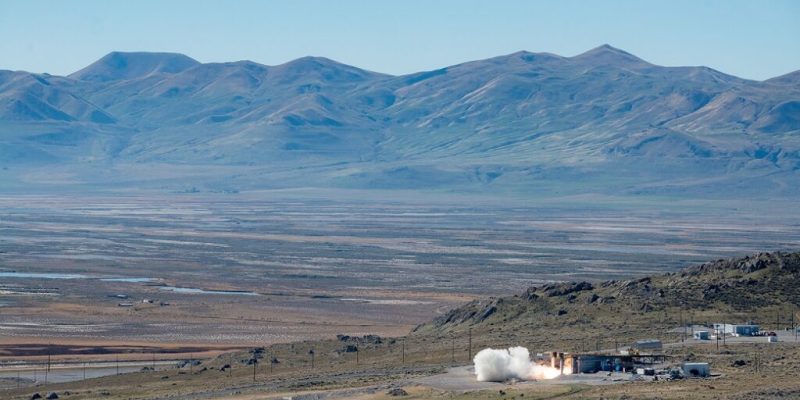 The offensive weapon systems will allow for precision and timely strikes against deep inland targets in difficult environments.

”Today’s successful test brings us one step closer to the design validation of our new missile that will be fielded by both the Navy and the Army,” said Vice Adm. Johnny R. Wolfe Jr, Director, Navy’s Strategic Systems Programs, which is the lead designer for the common hypersonic missile. ”We are on schedule for the upcoming flight test of the full common hypersonic missile. Our partners across government, industry, and academia are continuing the excellent work that is essential to providing a hypersonic capability to our warfighters as quickly as possible.”

This SRM test is part of a series of tests validating the newly developed common hypersonic missile. This live-fire test follows previous tests of the First and Second Stages on May 27 and August 25, 2021. This static fire test marked the first time the First Stage SRM included a thrust vector control system. The thrust vector control system is a key component of the missile booster that allows the rocket motors to be maneuverable in flight.

The Navy and Army are on track to test the full common hypersonic missile that will be a catalyst for fielding the CPS and LRHW weapon systems. The services are working closely with government national laboratories and industry to continue developing and producing the common missile.

“This test continues to build momentum to deliver hypersonics capability for our warfighters in support of the National Defense Strategy,” said LTG L. Neil Thurgood, Director of Hypersonics, Directed Energy, Space, and Rapid Acquisition. “Fielding hypersonic weapons is one of the highest priority modernization areas the Department of Defense is pursuing to ensure our continued battlefield dominance, and the joint team did a tremendous job executing this test and keeping us on schedule.”

Information gathered from ongoing tests will further inform the services offensive hypersonic technology development. Hypersonic weapons are capable of flying at speeds greater than five times the speed of sound (Mach 5), are highly maneuverable, and operate at varying altitudes. The common hypersonic missile design for sea and land-based applications provides economies of scale for future production and relies upon a growing U.S. hypersonics industrial base.

Check out Naval Library App to find out more about the specifications of the U.S. Navy’s missile inventory.

China warns US for more explanation about nuclear submarine collision

By OTC11 hours ago6 views